Gordon Ramsay Is Reviewing Dishes On Twitter. Ready To Be Roasted? 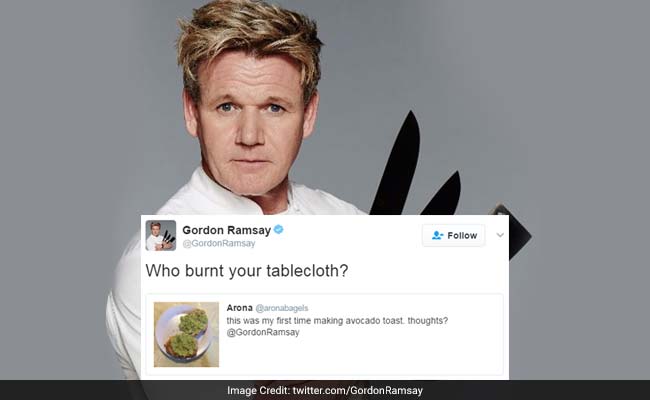 Chef Gordon Ramsay is revewing dishes on Twitter and it's brutally funny.

Chef, restaurateur, television personality - Gordon Ramsay is known for many things. Unfortunately, tact and diplomacy are not those things. Anyone even vaguely familiar with Hell's Kitchen, MasterChef or Kitchen Nightmares will know of his legendary temper and brutal food reviews. Except for MasterChef Junior, where Chef Ramsay is gentle and encouraging, his savage tongue and use of profanity have often been the talking points of his shows. So what happens when amateur chefs and food enthusiasts start tweeting to Mr Ramsay photos of the dishes they cook, asking for his opinion? Well, let's just say that chicken is not the only thing that Mr Ramsay is excellent at roasting.

Promoted
Listen to the latest songs, only on JioSaavn.com
Take a look at some of his most brutally funny replies.

Who burnt your tablecloth? https://t.co/N3aF8RDqC8

this was my first time making avocado toast. thoughts? @GordonRamsaypic.twitter.com/kVDy3TLcw4

Could you not hear your fire alarm ? https://t.co/FgrSHVX5A2

@GordonRamsay what do you think of my grilled chicken?? pic.twitter.com/ZghKrN88dY

3. You can't fault him for his honesty

Looks like toxic scum on a stagnant pool https://t.co/3Rf6s62Rgk

@GordonRamsay pretty sure this is the best poached egg in a noodle soup you will see all day! pic.twitter.com/rzoPjgis7Y

4. At least he said congratulations!

@GordonRamsay slaved over this for hours! How's my dinner looking mr ramsay? pic.twitter.com/a5XilH8YTX

check out this half eaten bowl of hummus (its my moms first try) @GordonRamsaypic.twitter.com/w31C5uzU3h

Kitty did you drop it ? https://t.co/nFpqlg0Xh2

@GordonRamsay hi what do you think of my cake I made thanks xo pic.twitter.com/xTnqzSeuYd

This is why I'm not a vegetarian https://t.co/pZObMH0wnb

8. Told you tact is not one of his stronger suits

@GordonRamsay Breakfast A or Breakfast B? pic.twitter.com/iXGtRMBO1c

9. You'll forgive us for not submitting any photos after this reply

Even your spinach is depressing £1.46 was that for the plate ? https://t.co/cQ0Zwt2vDi

Eye big boy, what do you think of our bomblitte (burrito-omelette), only £1.46 per portion @GordonRamsaypic.twitter.com/gYE4ftGJvM

To his credit, Mr Ramsay is not always brutal. Every once in a while, he'll say something sweet and encouraging too, sometimes even including helpful advice. Sample this:

Looks good, 5yr olds don't like lemon peel, next time use a micro plane and lightly zest the top.... https://t.co/7jNFWzaRr2

@GordonRamsay my friend made this cake for her son's birthday. Please rate it. It's a lemon cake with blueberry compote filling pic.twitter.com/EZdm5FgbFz

So what do you think? Are you brave enough to submit photos of your food for reviews?