"I don't care if your eyes are closed, put the snacks back in the cabinet Amala." 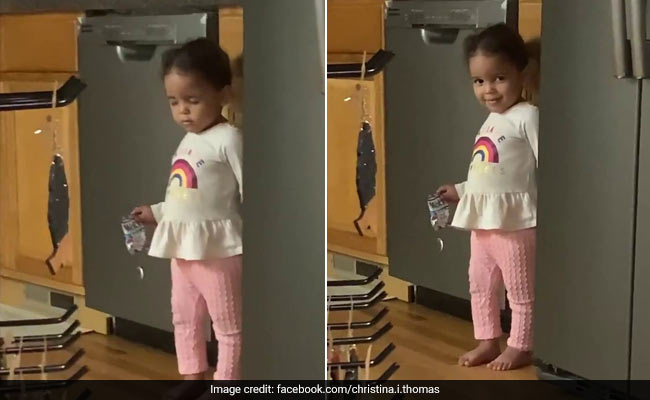 At some point or the other, we have all tried to escape punishment for doing something wrong - but this little girl did it in such a hilarious way, it has left millions of viewers in splits. A toddler from Connecticut, US, was caught red-handed by her grandmother stealing snacks from the kitchen, reports Daily Star. She decided the best way out of her predicament would be to pretend she was sleeping - while standing upright.

A hilarious video captured by Christine Vaughn shows her 20-month-old granddaughter Amala pretending to be asleep when she's caught nicking snacks. According to the New York Post, the video was filmed at their home in New Haven.

In the clip, Christine is heard saying: "Amala, put it back."

Amala keeps standing still with eyes shut tight, pretending that she is fast asleep and not, in fact, gripping a packet of fruit snacks that she is not supposed to have.

"You hear me? Open your eyes," her grandmother says. "I don't care if your eyes are closed, put the snacks back in the cabinet Amala."

The cheeky toddler finally opens her eyes and offers a winning smile that is sure to leave you in splits. Take a look at the video below:

The video has collected a whopping 1.6 million views on Facebook where it was shared last month. It also made its way to Twitter, where it has gone viral with nearly 5 million views and thousands of amused reactions.

Many social media users rushed to the defense of little Amala.

This child is innocent. You cannot see her with her eyes closed. Case closed.

Others congratulated her on the hilarious snack heist.

Sleepwalking to the snacks cupboard 🤣 that's the strategy I'm down with 😍🥰😘

Watch: Alligator Sneaks Up On Friends Fishing In Florida Everglades