Golfer Continues Playing As Alligator Strolls By In Bizarre Video

He estimated the alligator to be about 7 feet long 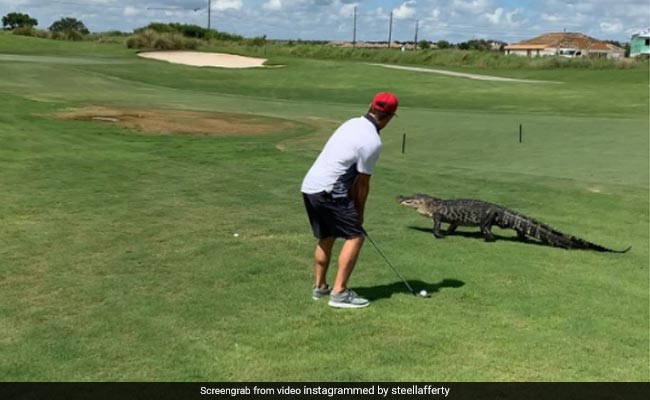 Steel Lafferty continued playing as a huge alligator strolled by him on the golf course.

Alligators seem to be everywhere in the US state of Florida - so much so that residents don't even seem fazed by them. A video going viral online shows a golfer concentrating on his game even as a huge alligator strolls by casually on the course. The video was shared by professional wakeboarder Steel Lafferty. According to Fox News, Mr Lafferty was playing golf at the ChampionsGate Country Club in Orlando on Wednesday afternoon when he had the unexpected run-in with the gator.

He posted the bizarre video on Instagram and wrote: "Golfing in Florida is just different..."

In the video, he can be seen taking a shot, seemingly unconcerned by the alligator walking past him. He estimated it to be about 7 feet long.

Golfing in Florida is just different... 🐊

Since being shared online on Thursday, the video has collected over 80,000 views and hundreds of stunned comments.

"Can't decide if that's savage or stupid," wrote one person in the comments section. "That's just crazy," said another, while a third simply wrote "nope".

"I wasn't too worried," Mr Lafferty told CNN. "I wakeboard professionally so I'm always in the water and I've kind of been around gators my whole life. There was a bit of a worry, but it seemed like he was doing his own thing so I let him go."

He told Fox News that the alligator eventually disappeared into a lake near the golf course.

This is not the first time that Florida alligators have made dramatic appearances at odd places. In the last few months alone, one alligator was spotted climbing a fence, another was found in a home's swimming pool while a third managed to enter a house by breaking in through a window.