"It's an out of focus picture of a freshly glazed doughnut," joked one person on Twitter 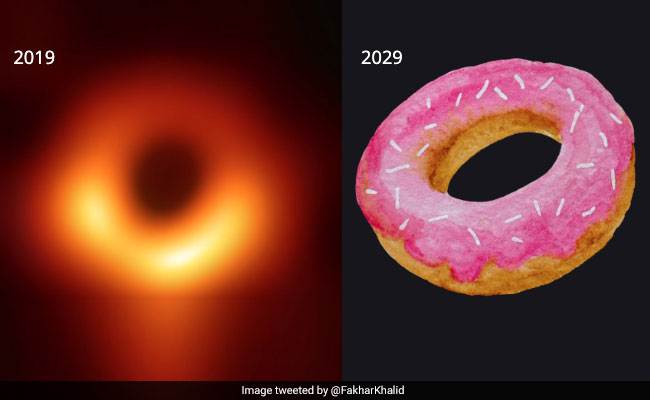 The first image of a black hole has inspired a ton of jokes and comparisons on social media.

In what is being considered a significant milestone on the path to understanding the universe, scientists have managed to capture the first ever photo of a supermassive black hole. The black hole is located at the center of Messier 87, the largest galaxy we know of, about 54 million light-years away. Sharing the highly-anticipated portrait online, NASA called it a "game changing breakthrough".

What does today's black hole image news mean? Our @ChandraXRay Observatory team puts it into perspective and shares just what a difficult feat it was for @NSF and @EHTelescope to obtain the new black hole image. Read more about #EHTBlackHole: https://t.co/s9xoxt8l3Spic.twitter.com/TQD8HSdbGG

But for some on Twitter, these lofty ideas held no importance - they were more immediately concerned with cracking jokes at the black hole's expense. Soon after the black hole image was released online, netizens flooded social media with memes and jokes. Take a look at some of the best ones below:

Many found the pic a little underwhelming

but this looks like image of sun captured in my dabba fone in the evening.#BlackHolePicturepic.twitter.com/cEJph3PXeu

That one last “vada” slowly being deep fried in the heavily reused thick cooking oil, at a tiffin center ;)#BlackHole#vada#space#FirstImageOfBlackHolepic.twitter.com/NRdtAHfu57

idk why but i really want some toasted bagel rn #BlackHolepic.twitter.com/DUZh0RIE4Q

I am sure the spatial resolution of the #blackhole images will get better in future. pic.twitter.com/uN9lmN9fGe

It's an out of focus picture of a freshly glazed doughnut. #BlackHolepic.twitter.com/UsyAuwir3Z

To others, it bore a striking resemblance to the Eye of Saur from Lord Of The Rings

And a lot of jokes were cracked

Me: mum take a nice picture of us
Mum: how does it work
Me: just press the button fgs
Mum: pic.twitter.com/iEePmsxv5N

SCIENTISTS: “We've concluded that humans are catastrophically warming Earth”
RESPONSE: “That conflicts with what I want to be true, so it must be false”

Scientists have just released the first known pictures of an actual black hole. The gravity is so strong that no treats can escape, and it sucks people in from long distances to give belly rubs. #EHTBlackHolepic.twitter.com/GijUUVH6Pb

Which joke made you laugh out loud? Let us know using the comments section below.