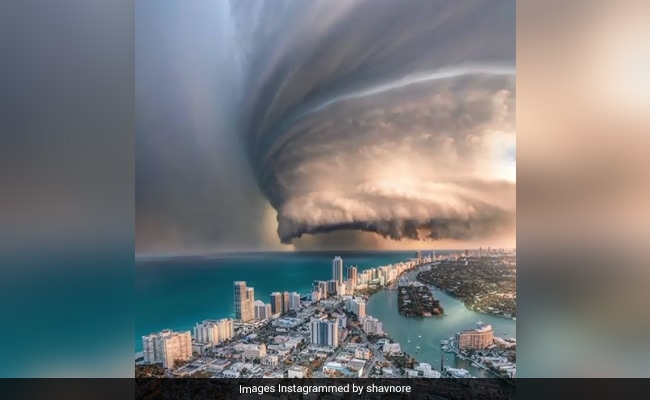 Hurricane Dorian unleashed massive flooding and caused extensive destruction in the Bahamas last week before moving towards the US. A viral video claims to show the movement of the storm towards the southern US state of Florida. The video has been widely circulated on microblogging website Twitter.  Take a look at it below:

A view of Hurricane Dorian ???? from the coasts of Florida. pic.twitter.com/1CgHofJ2LG

However, the video is not real - it is a digitally created artwork. According to 7 News, it was created by American artist Brent Shavnore, who describes himself on Facebook as a "Digital Artist specializing in mind blowing dreamy images of seascapes."

A reverse image search shows that the video was posted to his Instagram account on May 20 - long before Hurricane Dorian had formed.

In an email to news agency AFP, Mr Shavnore confirmed that the artwork was an animated version of an image he created using two stock photos - one that shows the Miami South Beach and the other of storm clouds. The artwork was animated by Instagram user The Glitch:

Mr Shavnore also confirmed on his Facebook page that the viral video is actually an artwork.

After ravaging the Bahamas and parts of US, Hurricane Dorian made landfall in Nova Scotia province of Canada on Saturday, uprooting trees and leaving hundreds without power.

In December last year, a massively viral image of a diamond-studded airplane was also revealed to be a digitally created work of art.