"Me in my sick new car (left him the money)," Elon Musk wrote. 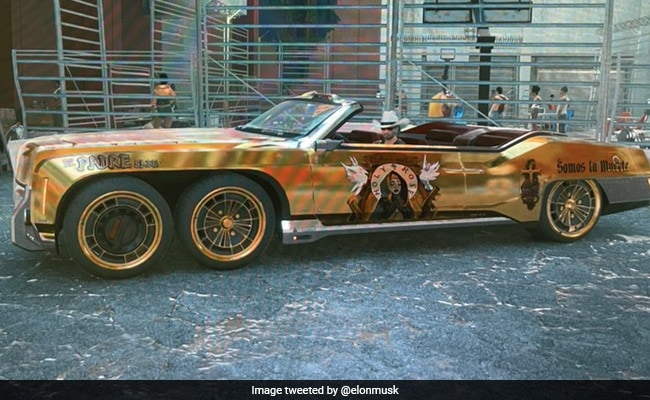 Elon Musk is well-known for the outlandish posts and funny memes that he shares frequently on Twitter, but one of his latest tweets has left his followers more confused than usual. "Me in my sick new car (left him the money)," the Tesla chief wrote on Saturday, sharing a picture of a golden convertible with six tyres and detailed artwork on it. Inside the car sits a man in a cowboy hat.

The tweet, which has racked up more than 2 lakh 'likes', also generated a fair bit of confusion on the microblogging platform as Twitter users tried to ascertain whether the tech billionaire had actually purchased a flashy new car.

Me in my sick new car
(left him the money) pic.twitter.com/EGaY1FVfHm

"Honestly not going to even try to decipher this one," wrote one Twitter user in the comments section.

"No offense Elon Musk but I don't see what's special about your new car. That's a misuse of wealth cause it's vanity... use your wealth to help people," another remarked.

However, the mystery of Elon Musk's new car was unraveled when some people in the comments section identified the picture as a screenshot from the video game Cyberpunk 2077. Cyberpunk 2077 is an action role-playing video game developed and published by CD Projekt.

I think I've seen this car, in the videogame Cyberpunk. #cyberpunkhttps://t.co/mVNvwUhJAO

Why is everyone talking about him spending his money? This is from cyberpunk my dudes

Elon Musk is known to be a cyberpunk genre enthusiast besides being the CEO of Tesla and SpaceX. Earlier this year, he had also tweeted on Cyberpunk 2077 after revealing that the video game could be played on the gaming computer inside Tesla Model S.

After sharing a screengrab from the video game, Elon Musk took to the microblogging platform again on Sunday - this time with a meme about memes. Here's what he posted:

Pretty relatable, would you say?

Elon Musk is an active Twitter user who frequently posts memes, photos and replies to queries on the microblogging platform.