"Zurura clearly loves the chance to play a 'big brother' role to Pare." 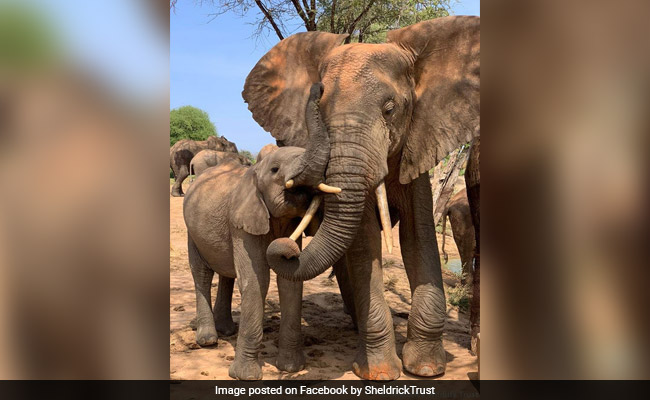 Zurura and Pare are adoptive siblings in Kenya.

Pare the elephant was less than a year-old when he arrived at the Sheldrick Wildlife Trust in Kenya in 2016. A suspected victim of poaching, he arrived emaciated and riddled with parasites, according to the Trust. The Sheldrick Wildlife Trust operates an orphan elephant rescue and wildlife rehabilitation program, and their keepers took Pare under their care. But the baby elephant also found a friend and companion in another orphaned elephant. Ten years his senior, Zurura began to play big brother to Pare, and their heartwarming story has touched hearts on social media.

After sharing a picture of the adoptive siblings on Twitter last month, the Sheldrick Wildlife Trust took to Facebook on Monday to reveal more details of their heartwarming story.

According to the Trust, Pare was brought to their rescue centre four years ago. "It took a long time for his condition to improve, however, thanks to his strong will to live and the round-the-clock specialist care he received from his Keepers, he regained his health and, in December 2018, he graduated to our Ithumba Reintegration Unit, following in the footsteps of many rescued orphans that went before him, including Zurura," they wrote.

The Ithumba Reintegration Unit is situated close to the Tsavo East National Park in Kenya. It is home to older dependent orphaned elephants, aged three and over, who are transitioning to a fully independent life in the wild.

By the time Pare arrived at Ithumba Reintegration Unit, Zurura had already transitioned back to the wild, but the 14-year-old elephant kept coming back to the unit to spend time with other orphaned elephants there. These visits thrilled Pare, who found a big brother in the older elephant.

"Zurura clearly loves the chance to play a 'big brother' role to Pare and all of the Ithumba herd too," the Trust wrote while sharing a photo of the two elephants together. The photo shows Pare looking up adoringly at his adoptive big brother.

Their Facebook post has touched hearts on the social media platform and gone viral with over 11,000 'reactions' and nearly 900 'shares'.

"Elephants are amazing. Why can't people be as kind and nurturing to each other," wrote one person in the comments section.

"This truly made my day," said another, while a third commenter wrote: "Ahhh that baby adores the big guy."

What do you think of their story? Let us know using the comments section.