"Oh Sh*t": Dwayne 'The Rock' Johnson Is Stunned By His Doppelganger

Eric Fields, who is a police officer in Alabama, bears a striking resemblance to the Hollywood star. 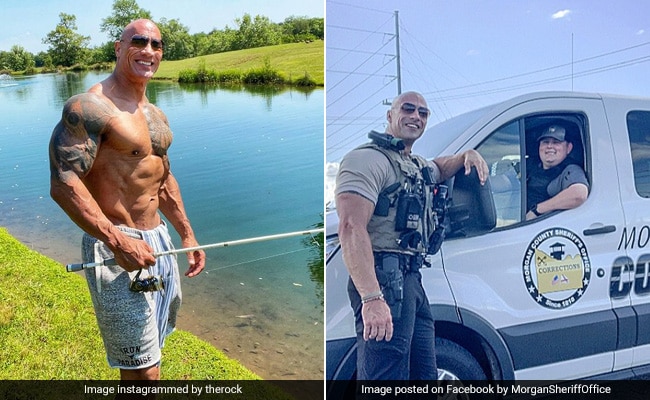 Celebrity look-alikes are plenty on social media. Despite all the fuss and hype, very few actually bear a striking resemblance to the public figures they are compared to. However, if there was ever an award for the best celebrity doppelganger, we have no doubt that it would be bagged by Eric Fields from Alabama. The police officer bears a striking resemblance to the Hollywood actor, Dwayne Johnson, fondly referred to as “The Rock” by fans and the media. And now, the actor himself has admitted to being stunned and impressed by how similar the two looked.

It all started with a Facebook picture of Lieutenant Fields shared by the Morgan County Sheriff's Office. The pic soon went viral for the cop's resemblance to the Hollywood star. The story gained further attention when a man in the area went up to Lieutenant Eric Fields and requested a picture with him, given his resemblance to Mr Johnson. The post said, “This gentleman recently ran into our Sergeant Mason and informed him that he wanted to meet our deputy [Lieutenant Eric Fields] that people say looks like "The Rock". Sergeant Mason passed that along and Lieutenant Fields was happy to swing by the Hartselle Wal-mart to see him. Tyler is one of their many hard workers and it was great to meet him and some of his co-workers.”

The image soon went viral and caught the attention of Dwayne Johnson himself. Reacting to a post by a news outlet that placed photos of Mr Johnson and Mr Fields next to each other, the actor said that the police officer was “way cooler” than him.

Quote-tweeting the post, “The Rock” said, “Wow. The guy on the left is way cooler.  Stay safe brother and thank you for your service. One day we'll drink Teremana and I need to hear all your “Rock stories” because I know you got them.”

Responding to the post, Mr Fields shared a selfie posing with a bottle of Teremana, the tequila brand owned by The Rock. He wrote, “Thanks brother and cheers,” he wrote, tagging the star.

Mr Fields is no stranger to comparisons with the Hollywood star. Speaking to AL.com, he said, “I've been called The Rock and Vin Diesel's love child. I go along with it. It's humorous. It's flattering."

In addition to being an actor, Dwayne Johnson is also a producer, businessman, and retired professional wrestler. “The Rock” was his name in the ring. Mr Johnson is best known for his work in films such as The Scorpion King, The Mummy Returns, G.I. Joe: Retaliation, Hercules, San Andreas, Fast and Furious, and Jumanji, among others.