The lion cub was found abandoned in a cage (AFP Photo)

Dutch police were on Sunday seeking the owners of a small lion cub found abandoned in a cage in a field outside the central city of Utrecht, police and news reports said.

"Today (Sunday) we received quite an extraordinary message: 'a witness has found a mini-lion in a cage in a pasture'," local police said on their Facebook page.

"When we arrived at the scene, we discovered a lion cub in a cage. It seems to have been abandoned," the police said, estimating the little feline to be about four months old.

The cub was first spotted by a jogger near the small village of Tienhoven, about 10 kilometres (six miles) north of Utrecht, a local news report said.

The cub was taken for examination by a veterinarian, and then to the Lion Foundation in northern Netherlands, the NOS public broadcaster said.

"Its cage was not very sturdy and there was a chance that it could have escaped," added vet Peter Klaver, adding that the  police initially asked him to sedate the animal.

"But eventually that was not necessary and we managed to get the lion cub into my car, cage and all," he told the RTL private broadcaster.

Klaver said he believed the cub was dumped because it was getting too big to handle.

"I've been all over the world to sedate animals, also lions and tigers. This is the first time something like this has happened to me," the vet said.

Robert Kruijff, director of the Lion Foundation said the cub was doing well and did not seem to be malnourished.

"We now have him in quarantine, and he needs a lot of rest," Kruijff told the NOS, adding the animal was being held in isolation from other lines.

"A caregiver is giving him small pieces of meat," said Kruijff, whose foundation mainly takes care of former circus animals. 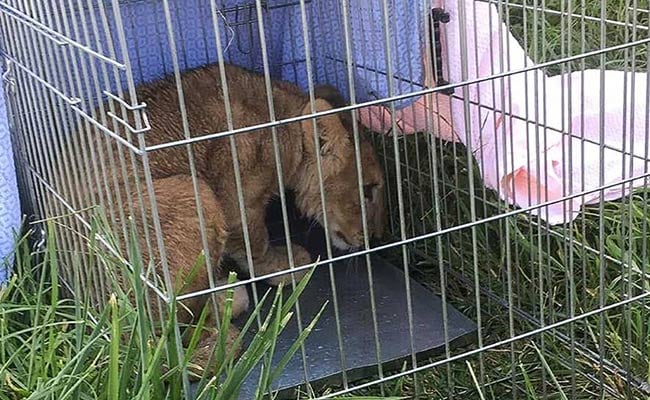 Meanwhile local police and the Dutch food and goods watchdog appealed to the public for information leading to the lion cub's owners.

"If you know anybody who recently bought a lion cub, or know anything about this particular cub, please contact us immediately," police said.

Keeping an animal such as a lion as a pet is illegal in the Netherlands -- and the maximum penalties for abusing or abandoning animals are high, including stiff fines or even jail terms.