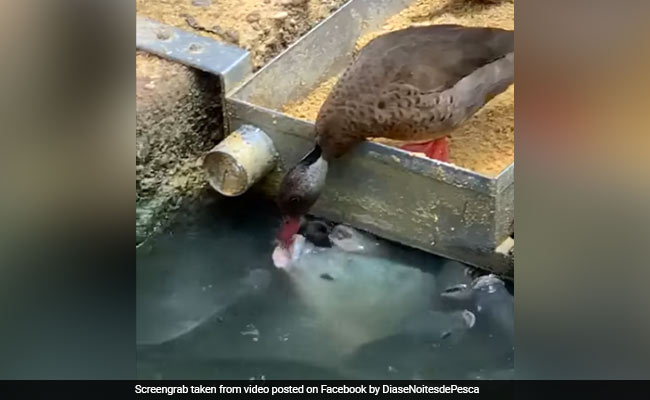 A viral video shows a duck 'feeding' grain to a fish.

A video shared on a popular Facebook page shows a duck 'feeding' fish from its own food bowl. The unusual scene has gone massively viral online and left social media users amazed.

In the undated video, the duck is seen standing in a container full of feed that is placed above a water body. The kind-hearted duck picks up grain from the container and dips it into the water below for the fish to feed on.

While it is not clear where the video was filmed, it was posted last Saturday on a popular Brazilian fishermen's page called 'Dias e Noites De Pesca', where it has collected a whopping 12 million views.

Along with 12 million views, the video has also garnered over 2.8 lakh shares and thousands of comments. It has also made its way to other social media platforms like Twitter, where many shared possible theories about the duck's behaviour.

It's actually trying to bait the small fish and make a meal of it...

Soooooo sweet and if you notice it remembers what fish is fed and tries to get all the fishes!

This, however, is not the first time that a duck was caught on camera 'feeding' fish. A similar video had also gone viral in 2015 and at that time, Jennifer Gordon, executive director of Carolina Waterfowl Rescue, had explained to The Dodo what was actually happening.

"While it's a nice thought that he would be feeding fish, the reality is that all ducks dip their food in water to eat," she had explained. "So what's actually happening is that the fish are trying to steal his food when he puts it into the water."