You'll want to play this on a loop 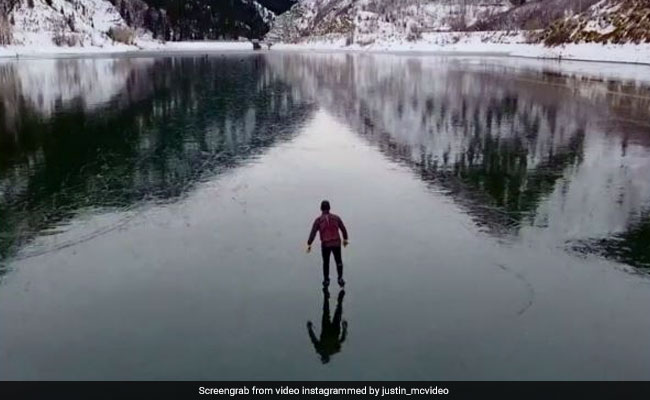 There aren't many things that are good about extremely cold weather. However, this breathtaking ice skating video definitely is. A Utah man's drone footage of an ice skater on a frozen dam is leaving many on social media impressed. Chances are when you see the clip, you too would want to keep watching it over and over again.

"I knew once I shot it, it was going to be a great clip," Justin McFarland, who shot the video, told NDTV. He later posted the clip on Facebook and Instagram, where it won many hearts.

Recorded at Pineview Dam in Utah, US, the video shows a skater skating on the frozen dam. While the clip may seem scary to some, the skaters took all necessary precaution to ensure they were safe on the ice.

"You'll notice the skater is wearing a life jacket and holding two screw drivers, just in case. The ice looks dangerous but they tested it out before skating. It is about four inches thick here, with a thin layer of water on top giving the reflection and covering the skate tracks back up," Mr McFarland told NDTV. He even posted a warning while sharing the video, urging people to test the ice beforehand and not try to one up the video.

Promoted
Listen to the latest songs, only on JioSaavn.com
Take a look at the video below:

WARNING: I would feel partially responsible if somebody were to see my video, go skating here without caution and get hurt. These skaters are wearing life jackets, have tethers, and are carrying screwdrivers. The ice on THIS DAY had been tested extensively. Please test your own ice each day, don't try to 1UP this video with something careless. Thanks, and enjoy the clip. Ice skating on Pineview Reservoir Sample, stay tuned for more.

The extended cut of the wildly popular ice skating clip from Pineview this weekend; Enjoy, and please skate responsibly