It is believed that the dormouse had been "plumping up for hibernation". 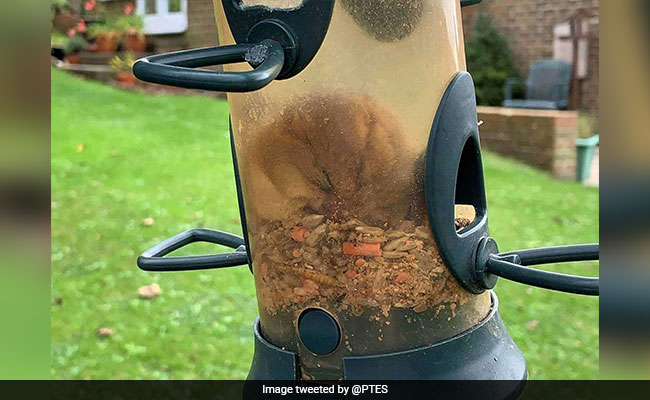 A dormouse squeezed into a bird feeder and got too fat to get out.

Social media users are in stitches over a greedy dormouse that squeezed into a bird feeder and feasted on seeds until it got too fat to escape. According to the BBC, the nocturnal creature on the Isle of Wight off the coast of UK went viral after for its hilarious pictures that were sent to the Hampshire Dormouse Group and later posted on social media.

It is believed that the dormouse had been "plumping up for hibernation".

Well, plump up it did. So well, in fact, that it had to be rescued from the bird feeder after getting too chubby to escape.

The creature was spotted napping inside the bird feeder by a local who called the Hampshire Dormouse Group for advice. The Group told the resident to ease the dormouse out and release it into a hedgerow, reports The Independent.

An endearing picture of the dormouse was shared on Twitter by the People's Trust for Endangered Species, a wildlife charity, last week.

We've seen dormice curled up in some peculiar places but we've never seen this! The sender of the photo found this #dormouse had eaten so much it was too fat to get out of the feeder! After a careful release it went on its way. Safe to say it will survive hibernation!
????C Hewins pic.twitter.com/dYM35mJGDS

The picture quickly went viral on the microblogging platform, collecting thousands of 'likes' and amused comments.

An accurate pic of me come April. This is adorable!

Oh dear, what a mousetake to make.

Catherine Hadler, from the Hampshire Dormouse Group, said: "Everyone loves a chubby dormouse - it's quite unusual to see them during the day.

"He was plumping up nicely for hibernation. Safe to say this fatty will survive hibernation just fine."

Dormice are nocturnal animals found in Africa, Asia, and Europe. In the UK, the population of hazel dormice has declined due to loss of habitat.

Kamala Harris Shares A Recipe. No, It's Not Dosa