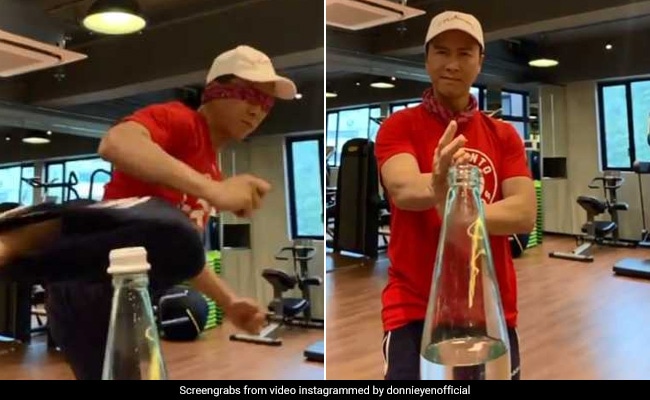 Some Internet challenges are easier than others. The Ice Bucket Challenge, for example, required nothing more from its participants than to shiver through a bucket of freezing water. For the Horn Challenge, all one had to do was squeeze an unsuspecting person's face. But the latest craze sweeping social media is a little different. The Bottle Cap Challenge requires skill. Kicking a cap off a bottle in the middle of a kick is not easy, after all. So when actor Donnie Yen managed to pull off the feat blindfolded, he impressed everyone.

On Thursday, the 'Rogue One: A Star Wars Story' actor shared a video which shows him effortlessly nailing the #BottleCapChallenge. "Chirrut feeling the force + Ip man's steady aim + no plastic bottle = the universe strongest," reads his caption of the post.

Since being shared online, the video has been viewed over 2.3 million times! It has also left everyone watching it very impressed, with some even calling the 55-year-old martial artist the "winner" of the challenge.

"Yes!! The master," wrote one person in the comments section. "A true master of the craft," said another, while a third added "Legend."

The feat also won praise from Tiger Shroff, who first applauded the actor with fire and clapping emojis in the comments section, and then tried the #BottleCapChallenge blindfolded himself.

"Inspired by the great @donnieyenofficial!" he wrote while sharing his own attempt:

The challenge was kick started by taekwondo instructor and fighter Farabi Davletchin on Instagram. It was then picked up by Max Holloway, current UFC Featherweight champion, who has been credited for its popularity.