"It is shameful, poor animals," commented one person 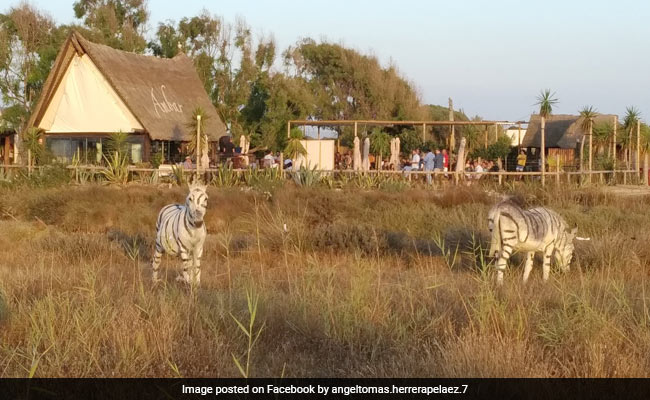 Two donkeys were painted black and white to resemble zebras.

For a safari-themed wedding reception in a Spanish beach town on Saturday, two donkeys were painted black and white to resemble zebras. The incident has caused massive outrage online, where pictures of the painted donkeys were shared on Monday.

According to the Daily Mail, the donkeys were filmed plodding around outside a bar by a concerned local in El Palmar, a town in Cadiz. He termed the incident "shameful" and reported it to animal rights activists.

"The donkeys, in danger of extinction, used for tourist exploitation," wrote Angel Tomas Herrera Pelaez while sharing the images online.

His post also led to other netizens criticising the mistreatment of the animals.

"It is shameful, poor animals," wrote one person in the comments section.  "Did they really need to paint donkeys for a wedding?" another questioned.

According to Andalucia Informacion, the case was brought to the attention of the Agricultural and Commercial Office (OCA), as well as the Nature Protection Service of Spain. An investigation into the incident has been opened.

This, meanwhile, is not the first time that someone has tried to pass a donkey off as a zebra. A zoo in Egypt was accused of pulling a similar stunt last year.