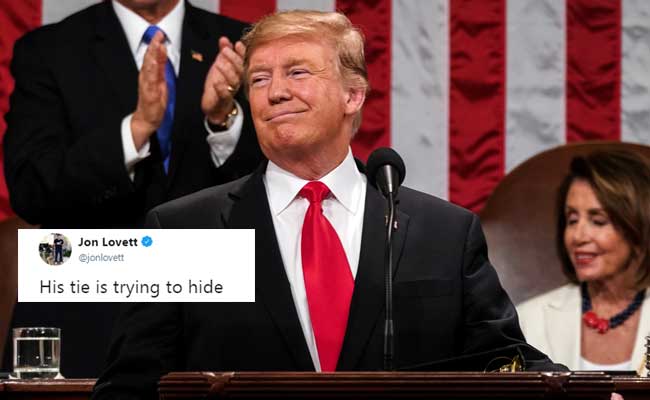 As US President Donald Trump delivered his second State of the Union speech on Tuesday night, Twitter focused its attention on something seemingly askew about his appearance - his tie. Netizens were quick to notice that his bright red tie was crooked, and it was soon all anyone could talk about. As jokes about Mr Trump's tie flew thick and fast on Twitter, we collected some of the best ones for you.

If I ever go on TV with a tie that crooked, I need y'all to tell me here. Thx. #HeyNext

The man walked past all of Congress and nobody told him his tie is messed up. That's a sign they don't love you. #SOTU

His tie is trying to hide

The state of the president's tie is askew.

Is someone going to tell Trump about his tie

The tie was soon trending on the micro blogging site

Very few managed to focus on the content of his speech

What's more CROOKED than Trump's tie? Everything he says. #SOTUpic.twitter.com/XJp83XUuG2

I can't focus on this speech until someone straighten's Trump's tie. #crookedtie#SOTU⁠ ⁠ #SOTU19⁠ ⁠

Incredibly enough, this is not the first time that Donald Trump's signature red tie has managed to make news. In 2017, Twitter had a great time poking fun of it after discovering that he used sticky tape to hold his tie together.

Who do you think is in charge of making sure Trump always has scotch tape for his tie? (Photo by @cariotir.) pic.twitter.com/7T0MgP1hWF

Trump uses sticky tape to hold his tie down. If that alone isn't grounds for impeachment then what has become of America? pic.twitter.com/yCXD8vg386

At this State of the Union address, the POTUS spoke to a joint session of the US Congress over his demands that Democrats end their opposition to funding a US-Mexico border wall. During his 82-minute speech, he outlined his political priorities and called illegal immigration "an urgent national crisis".