"Our dolphins are almost always very curious about the other Aquarium residents," said a staff member. 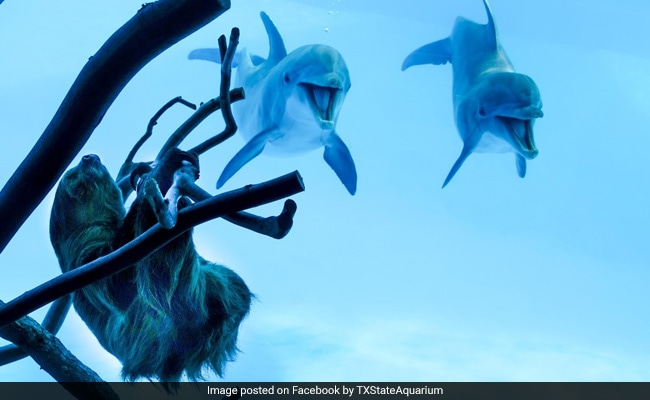 Liko and Schooner get excited on meeting Chico the sloth.

With zoos and aquariums across the world shutting down temporarily to contain the spread of coronavirus, employees have taken to arranging 'field trips' for some zoo inhabitants to visit other animals. These visits, while giving the Internet some adorable photos and videos to gush over, also act as enrichment activities for the animals. After the Shedd Aquarium in Chicago took their penguins on a trip to visit whales at the facility, the Texas State Aquarium treated the Internet to delightful pics of their dolphins meeting a sloth.

Last Friday, the Texas State Aquarium took their sloth Chico to meet dolphins at the Gulf of Mexico exhibit.

Photos of the interaction, shared on Facebook, show dolphins Liko and Schooner looking extremely excited on coming across the unexpected visitor outside their enclosure. For his part, three-year-old Chico seemed more interested in sleeping.

Photos of the meeting have gone viral on Facebook, collecting over 10,000 'shares' and more than 7,000 'reactions', along with hundreds of delighted comments.

"Was Chico asleep the entire time? Love this! Thank you for bringing us a few smiles and some good laughs!" wrote one person in the comments section.

"Wow! Great photos - the dolphins are so expressive!" another remarked.

"What fun enrichment. These pictures are amazing," a Facebook user said.

"As some of our most popular animals, it seemed an obvious choice for our sloths and dolphins to get a chance to see each other while we were temporarily closed. We have another sloth, Xena, but on that day, she was more interested in sleeping than meeting the dolphins!" they said.

"Our dolphins have had the opportunity to meet several other animals over the years, including baby gators, an African serval, a red-tailed boa and others. They're almost always very curious about the other Aquarium residents."

What do you think of the pics? Let us know using the comments section.