Dog Found With Arrow Through Its Neck, Animal Services Says It Has Recovered

Since the surgery, the dog has recovered and is lively, barking and wagging its tail for attention. 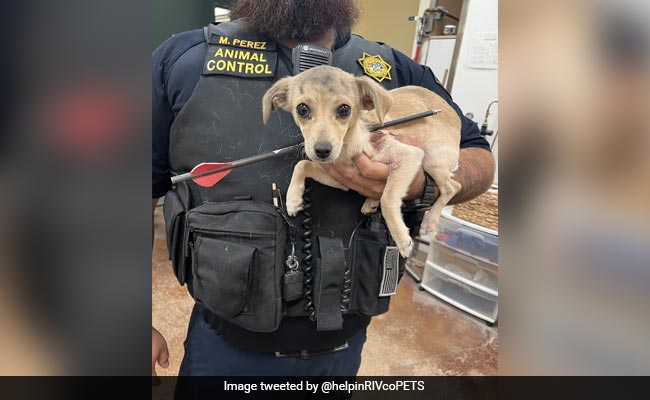 The pooch is now acting like a healthy puppy.

A four-month-old chihuahua puppy shot with an arrow nearly as long as its body is expected to survive after veterinarians removed the projectile from its neck.

According to Riverside County Animal Services, the unnamed dog was found wounded earlier this week in South Carolina, US. A woman had called 911 early morning on Monday after she heard the puppy “screaming” in pain. The animal services said that the sheriff's deputy picked up the female dog and transferred it to an animal services officer who then brought the dog to the Coachella Valley Animal Campus.

This happened today — and our team saved the dog's life. Thank you so much to ⁦@RSO⁩ for major assistance! Terrible act! ⁦@RivCoNow⁩ #Chihuahua#veterinarycare#animalcrueltypic.twitter.com/04R5CLgnkU

The officer saw that the projectile punctured the tan chihuahua's neck, following which he held the dog in his arms outside the facility before the hospital opened in order to make sure that the pooch did not run away or hurt itself. The animal services informed that the arrow was caught in a fence and the pooch could not get free.

After examination, the veterinary staff determined that the arrow did not strike the puppy's vital arteries. “It was purely a superficial wound,” veterinary technician Ivan Herrera told the Los Angeles Times. Mr Herrera also added that once the pooch was inside the facility, it appeared stoic and calm and allowed the staff to give her aid.

“For someone to willfully shoot this poor pup with an arrow is disgusting,” Animal Services Director Erin Gettis said in the statement. “We are shocked and we hope someone can provide us any information as to who did this,” he added.

The doctors were able to remove the pointed arrowhead from the shaft after the pooch was sedated. The dog has since "recovered and acting like a healthy puppy". As per LA Times, the pooch is lively, barking and wagging its tail for attention.