"Do You Like Spiders?": Royal Children Quiz David Attenborough In Viral Video 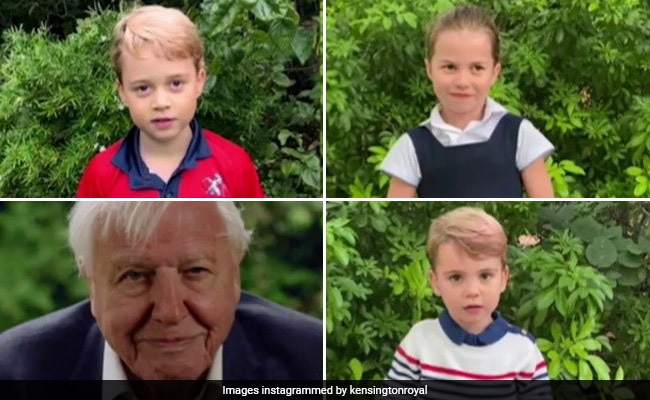 A video shared by Kensington Palace, the official Instagram account of Prince William and Kate, shows the naturalist and television personality interacting with the youngest royals of Britain.

Princes George, Princess Charlotte and Prince Louis appear in the video, asking Sir David questions related to nature and wildlife. Prince George, seven, sets the ball rolling with "What animal do you think will become extinct next?"

"Well let's hope there won't be any. Because there are lots of things we can do when animals are in danger of extinction," he responds, and goes on to cite the example of the once-endangered mountain gorilla.

After that, Princess Charlotte asks Sir David Attenborough if he likes spiders. "I like spiders. Do you like spiders too?" the five-year-old asks, to which the naturalist responds enthusiastically by saying that spiders are "wonderful" and "clever" creatures.

The youngest of the three Cambridge children, Prince Louis, then gets the naturalist to reveal his favourite animal. "What animal do you like?" the two-year-old asks. To find out the answer, watch the viral interaction below:

Since being posted on Instagram a day ago, the two-and-a-half-minute video has garnered a whopping 6.3 million views.

Sir David visited Kensington Palace last week and gave Prince George a fossilised giant shark tooth as a gift. The 23-million-year-old fossil was discovered by Sir David in Malta when he was holidaying on the Mediterranean island in the 1960s.