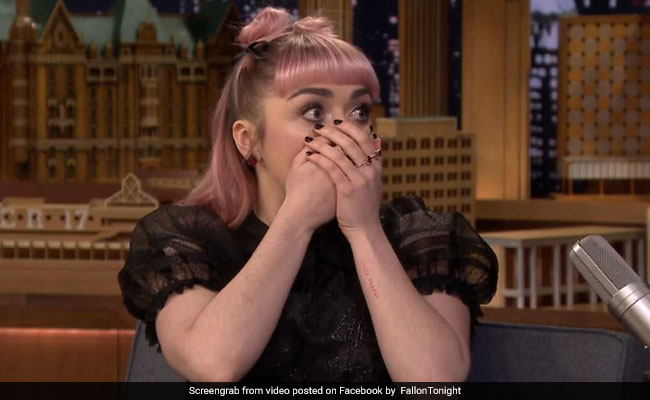 As anticipation builds for the final season of the super-hit TV show Game Of Thrones, fans were left shocked after actor Maisie Williams, who essays the character of Arya Stark on the show, apparently dropped a major spoiler.  When she appeared on The Tonight Show Starring Jimmy Fallon, Maisie set off a panic attack around the world as she revealed that Arya Stark didn't make it past the second episode of the season.

While talking to Jimmy Fallon, Maisie Williams said "I found out that Arya died in the second episode" before realising her slip-up and clapping her hands around her mouth. The Game Of Thrones team is under strict instructions to not reveal spoilers about the show, reports Metro.

The clip was shared online on the talk show's official Facebook page, where it has gone viral.

Watch the moment below:

Thankfully, it all turned out to be an elaborate April Fool's Day prank - one that managed to take in many a gullible Game Of Thrones fans.

Shared less than three hours ago on Facebook, the video has already collected almost 9-lakh views and over 9,000 comments.

"Ok, so I'm having a baby in 16 days and I literally almost just gave birth on my couch," wrote one person in the comments section. "I cried for her," exclaimed another.

However, many figured out that the whole thing was an April Fool's Day joke.

"Her acting was spot on amazing. I fell for it, I even noticed her hands shaking - that was some good acting," wrote one person. "This was the first prank I fell for all day," said another.

The final season of HBO's Game Of Thrones will air on April 14. It will be simulcast on Hotstar in India, which means that subscribers of streaming service can watch the series at the same time as HBO subscribers in the US.