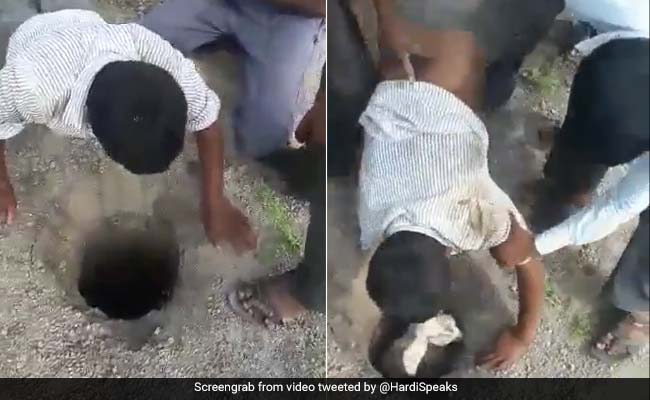 A man is lowered down a hole to rescue a goat that had fallen inside.

An old video that is going viral on social media again shows a man being lowered down a tiny hole to rescue a goat that had fallen inside. Social media users are applauding the group of men who came together to rescue the goat, praising them for pulling off a dangerous rescue operation to save a life. The video, which is at least a year old, began to gain viral attention after it was shared on Twitter two days ago by Additional Director General of Police (ADGP), Assam Police, Hardi Singh.

The video begins by showing a group of men sitting around a small hole in the ground. A few seconds in, one of the men is lowered down the deep hole as three others support him by holding his legs. When he emerges again, he is holding a bleating goat which runs away as soon as it is released, while the men cheer the end of the successful rescue operation.

Since being shared on the microblogging platform, the video has collected over 1.7 lakh views and nearly 10,000 'likes'. Many praised the group for rescuing the goat.

Bravo! The world needs more people like you guys ????. Thank you for making this world a bit kinder ????

Extremely dangerous. Salute to the man. He trusted his mates completely.

Some also pointed out that the holes should have been closed and the rescue mission was a dangerous one.

But this is not the right way. Shouldn't be encouraged.

In 2016, a group of men in Uttar Pradesh saved a goat from a python.