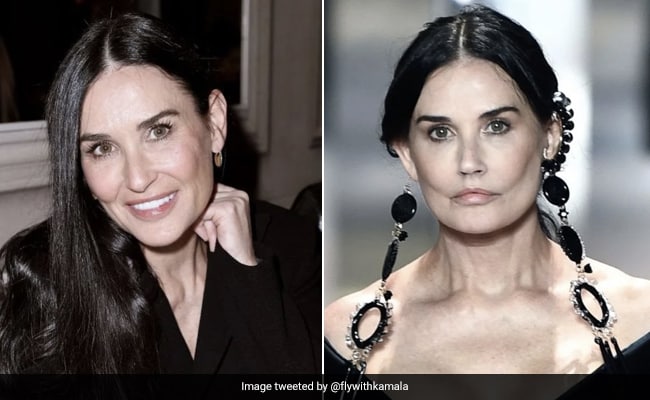 Actress Demi Moore has sparked rumours that she underwent plastic surgery after her recent appearance at Paris Fashion Week. Demi Moore, 58, opened the show for Fendi on Wednesday in a stunning off-shoulder silk suit and statement earrings - but fans speculated that the Ghost actress had gone under the knife, noting that her face looked "different".

Soon after the catwalk appearance, Twitter was flooded with questions from puzzled fans who said that the 58-year-old looked "unrecognisable" in photos from the event.

Others pointed to the "drastic difference" in Demi Moore's face, sharing photos from earlier years juxtaposed with pics from the Fendi event in Paris.

This is a drastic difference in the face. And I agree wholeheartedly with my previous statement in that she has cheek filler, a lip lift at the corners, and the stiffness of Botox. #DemiMoorepic.twitter.com/KJDeF7uDa3

A section of the Internet was critical, writing that the actress had become a "poster child for why not to get plastic surgery" and that she "looked so much prettier just a year ago."

Women like JLo, Liz Hurley, and Gwen Stefani have had tons of work done but they look great. Nothing against having work done. But don't do whatever Demi Moore has done. pic.twitter.com/S1sq9e8pt1

Demi Moore did not let that work settle before she did the Fendi show. Jesus.

Demi Moore has long faced rumours of plastic surgery. According to the Daily Mail, she addressed the rumours a decade ago after facing scrutiny over allegedly spending thousands of dollars on plastic surgery.

"I have had something done but it's not on my face,' she told Elle magazine in 2010, adding that constant speculation about her looks annoyed her.

"You know what? Maybe one day I'll go under the knife.

"It just irritates me that people are constantly saying how much I've spent on plastic surgery."

In 2019, she opened up about ageing gracefully. "Gravity is going in directions that I'm not so fond of. I can look in the mirror occasionally and say 'you're lying, I don't look like that.' but the reality is the comfort I feel in my skin is the greatest gift. I wouldn't trade it. I'm just happy to be where I am," she was quoted as saying by InStyle.