"Braemar made history as the longest ever ship to cruise through the Corinth Canal," wrote cruise company Fred Olsen 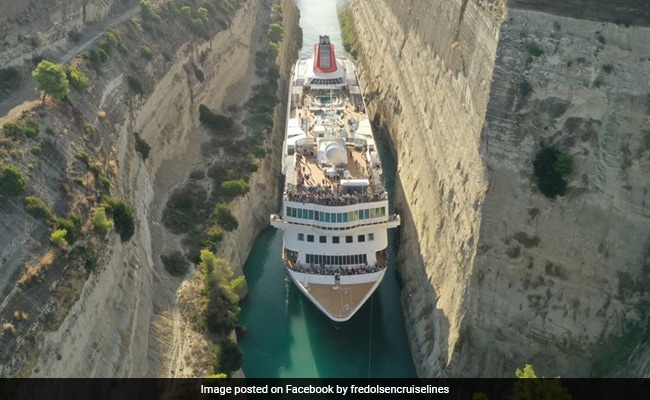 Cruise passengers held their breath as their ship sailed through the narrow Corinth Canal in Greece in a record-breaking moment last week. The 22.5-metre-wide Braemar cruise liner managed to squeeze through the rocky walls of the canal, which measures 24 metres at its narrowest point - making it the longest boat to make the journey, cruise company Fred Olsen said.

The Corinth Canal connects the Gulf of Corinth with the Saronic Gulf, separating the Peloponnisos from mainland Greece. It is 6.3-kilometres-long.

According to Metro News, the 24,000-tonne Braemar cruise liner was carrying over 1,200 passengers and crew members. People on the ship were at times able to touch the sides of the canal. A tugboat was used to assist the cruise ship through the canal.

A video of the cruise ship sailing through the canal has been viewed over 7 lakh times on YouTube. Watch it below:

"This is such an exciting sailing and tremendous milestone in Fred Olsen's 171-year history, and we are thrilled to have been able to share it with our guests," Clare Ward, director of product and customer service for Fred Olsen Cruise Lines said in a statement, according to CNN. "We know that this will be a holiday that they will never forget."