The 30-year-old argued for a half-hour with a judge, saying that while he knew his parents wanted him out of their house, he was entitled - as a family member - to six months' notice before an eviction 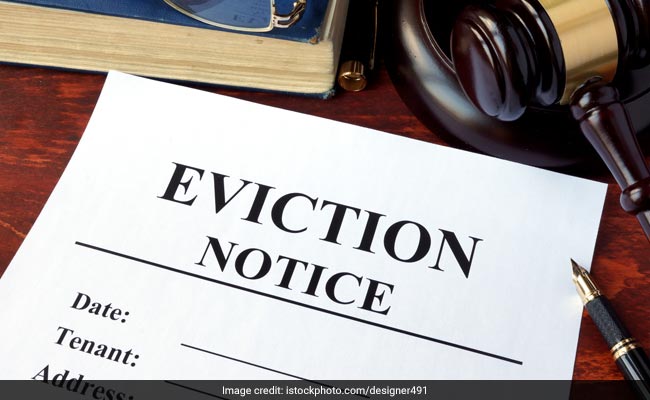 Michael Rotondo refuses to move out of his parents' house.

So much so that the 30-year-old argued for a half-hour with a judge in Upstate New York on Tuesday, saying that while he knew his parents wanted him out of their split-level ranch, he was entitled - as a family member - to six months' notice before an eviction.

Then, he ordered that Rotondo be evicted anyway, according to the Post-Standard.

"I want you out of that household," Greenwood told him, according to ABC News.

Mark and Christina Rotondo of Camillus, New York, near Syracuse, had brought the court case forward after their son ignored several eviction letters, some of which offered money.

The letter doesn't provide a reason as to why the parents want their son out, but suggests that he get a job, move his broken car and sell some of his belongings - such as his stereo and weapons - to make money in the interim.

"There are jobs available even for those with a poor work history like you," the letter reads. "Get one - you have to work!"

The couple's lawyer, Anthony Adorante, told the judge that he sought an order that could be enforceable by sheriff's deputies, the Post-Standard reported.

Rotondo put up a tough fight, refusing to speak directly to his parents in court, relying only on his legal arguments.

Greenwood listened quietly, then corrected Rotondo's claim that he was entitled to live in the house for six more months, according to the Post-Standard. He said family members get special treatment in only rare circumstances and called the six-month extension "outrageous."

Rotondo fired back, calling the judge's eviction order "outrageous." Greenwood said Rotondo's claims were based off an Internet search and showed him a copy of the appellate court decision that overrode Rotondo's argument.

The truth, Rotondo told reporters after the proceedings, is that he isn't ready to move out of his parents' home.

He said there had been no incidents with his parents, but that he did not speak to them. Rotondo has his own bedroom in the house, according to the Post-Standard. He said he supports himself through his business; but wouldn't elaborate, telling reporters: "My business is my business."

His parents declined to discuss the case with reporters at the courthouse and could not be reached for comment.

During the proceedings, Rotondo let nothing go unnoticed.

When a notice incorrectly listed the room for his court appearance, Rotondo asked for an adjournment. (The judge said he'd made it to the appearance just fine, despite the mix-up).

According to the Post-Standard:

"As Rotondo's parents sat quietly in the court gallery, Rotondo appeared to crave the spotlight. At one point, the judge called Rotondo up to the bench. Rotondo noted that microphones placed by the media were on the lawyer's lectern. He tried to take the lectern up with him.

"Afterward, Rotondo called out to the television camera crews to meet him outside the courtroom for an interview.

"There, he again lambasted the judge's eviction order and vowed to appeal."

Rotondo told the judge that his parents did not support him by providing him with meals or by doing his laundry for him. Greenwood, who appeared exasperated, suggested the man use Airbnb to find a place to stay on such short notice.

Greenwood finally asked the parents' lawyer to write up an eviction order that Greenwood would sign - and to have it include a reasonable time for Rotondo to leave the house, the AP reported.

In that time, Rotondo later said, he plans to file an appeal.

It was like "a real-life case of 'Failure to Launch,'" the AP noted, explaining: "In the 2006 Matthew McConaughey romantic comedy, the grown son's parents hire a woman to try to speed their son's exit."