"We didn't necessarily intend on trashing the dress, but the ocean had other plans." 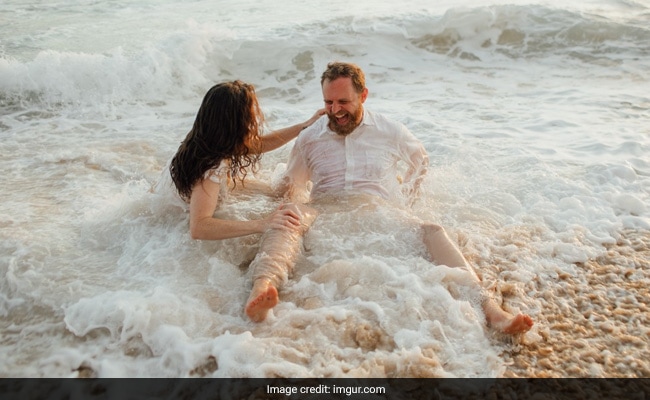 Tim and Bekah's wedding photoshoot did not go exactly as planned.

A couple's dreamy beach photoshoot did not turn out quite the way they had expected - but the Internet loves the results nevertheless. Tim and Bekah Blakely-Savage of Texas decided to have a beautiful beachside photoshoot in Hawaii after their wedding in Alaska last month, reports Fox News. So they dressed up in their wedding finery and posed on the sand, but failed to take the ocean into account.

The result? Hilarious pics of the couple getting washed away by a huge wave of water as they try to pose for the photoshoot.

"I used to live in Hawaii but my husband had never had the chance to visit, so when we found a great deal to pop over to the islands from Anchorage before we flew back home, we jumped on it," Bekah told Fox News. "It was actually my mother's suggestion that we take some beach pictures in our wedding gear, as a juxtaposition to our official wedding pictures on the chilly mountaintops and frigid glaciers of Alaska."

"We didn't necessarily intend on trashing the dress, but the ocean had other plans," Bekah captioned one of the pics from the ill-fated photoshoot, which she shared on Reddit. In the picture, Tim and Bekah are seen kissing as the ocean tide hits them.

We didn't necessarily intend on trashing the dress, but the ocean had other plans from r/wedding

More pics from the photoshoot show the two falling down, laughing as the water drenches them completely.

The photoshoot has gone viral on Reddit, collecting more than a 1,000 'upvotes' since being posted three days ago. It has also received a lot of love from other social media users.

"This looks like a photo from an epic romance movie!!! So beautiful!!!" wrote one commenter. "Your union has been blessed by the Earth! How wonderful," said another.

And fortunately, Bekah says that she managed to salvage her wedding dress. "Shoutout to the world's best dry cleaner who still managed to get all the spots and stains out," she wrote in the comments section.

This isn't the only time that wedding photo fails have amused the Internet. Take a look at this video on what goes on behind the scenes of wedding photoshoots to laugh out loud.