Read inOther Languages
This Article is From Jun 08, 2021

The big cat crossed several obstacles - including a few rivers, some of them wider than a kilometre, and three islands. 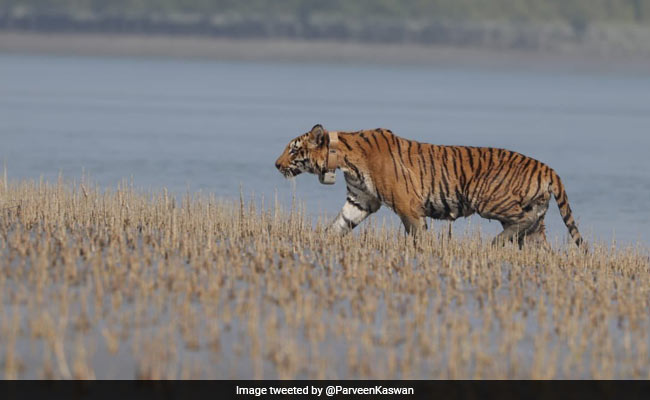 The male tiger had been radio-collared in December last year.

A tiger, radio-collared in the Sunderbans of India, was found in Bangladesh's part of the mangroves after undertaking a journey of about a 100 kilometres over the course of four months. During its long journey to the neighbouring country, the big cat crossed several obstacles - including a few rivers, some of them wider than a kilometre, West Bengal's chief wildlife warden VK Yadav was quoted as saying by Hindustan Times.

The male tiger had been radio-collared in December 2020 to help foresters track its movement and assess tiger-human interaction.

During its four month journey to Bangladesh, the tiger did not venture into any human habitats, said Mr Yadav.

"After initial movements for a few days on the Indian side, it started venturing into the Talpatti island in Bangladesh Sunderbans and crossed rivers such as Choto, Harikhali, Boro Harikhali and even the Raimangal," Mr Yadav said. He added that the tiger may originally have come from Bangladesh before forest officials captured him for tagging.

Indian Forest Service officer Parveen Kaswan, who had shared information about the radio-collaring of the tiger last year, shared an update on the big cat this morning. "This tiger covered 100 km and reached Bangladesh from India. Without visa though. Crossed creeks, islands and ocean," he wrote on Twitter.

Mr Kaswan had shared a picture of the collared tiger on the microblogging platform last year. Take a look:

VK Yadav shared further information about the tiger's journey with Times of India. According to him, between December 27 and May 11, the tiger moved across three islands: Harinbhanga and Khatuajhuri in the Indian Sunderbans, and Talpatti island in Bangladesh.

After May 11, the radio collar stopped giving signals. The tiger's last recorded location was Talpatti island in Bangladesh.

"The gadget also had a mortality sensor, which gives signals in case of the tiger's death. But that didn't happen. We also didn't get any static signal from the collar, which points that the tiger is safe," said Mr Yadav, adding that the collar had likely slipped off the tiger's neck.

TigerBangladeshTiger travels from India to Bangladesh