Cobra On The Road Brings Traffic To An Abrupt Halt In Udupi. Watch 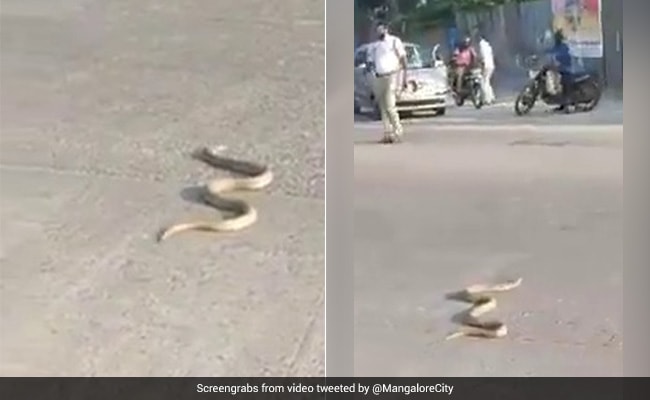 A cobra was spotted slithering on a busy road in Karnataka.

Peak hour traffic in Karnataka's Udupi came to a grinding halt on Thursday when a cobra appeared on the road. The presence of the reptile halted vehicular movement for about 30 minutes at a busy junction of the city, according to a Times of India report.

Footage that has gone viral on social media shows the snake slithering on the road, with a policeman controlling traffic to allow the reptile to move safely.

According to The Hindu, traffic policemen halted vehicles at the busy Kalsanka Junction on spotting the cobra. A few surprised motorists and pedestrians were seen filming the scene and taking photos of the snake on their smartphones.

A video of the snake was shared on Twitter by a page dedicated to the neighbouring city of Mangalore. "Movement of vehicles came to an abrupt halt for about 30 mins at the busy Kalsanka Junction in Udupi on Thursday when a cobra suddenly appeared on the road," the Twitter account said in its caption.

Movement of vehicles came to an abrupt halt for about 30 mins at the busy Kalsanka Junction in Udupi on Thursday when a cobra suddenly appeared on the road. ????

Traffic Police stopped the motorists, who waited patiently as the cobra moved slowly across the hot road surface. ???? pic.twitter.com/m5j1Y0zQiy

Footage of the snake has been viewed nearly 25,000 times on Twitter, where many dropped shocked reactions in the comments section.

"A traffic jam worth getting stuck in," said another.

A spokesperson for the city's police department said the snake was later rescued and taken away for treatment. Police said that aside from holding up traffic for about half an hour, the snake did not cause any other damage or inconvenience.