The pig was thrown off a 223-foot-high tower. 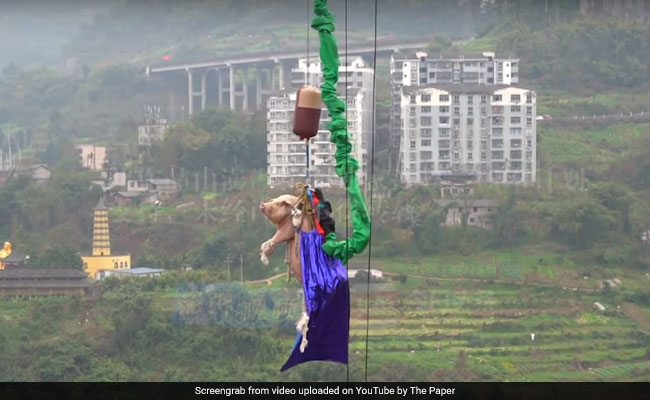 A pig was forced to bungee jump at a theme park in China.

A Chinese theme park has left thousands enraged with a stunt where they forced a pig to bungee jump off a 223-foot high tower. Video footage of the pig squealing as it is pushed off the tower has triggered a wave of backlash on social media, reports Chinese news outlet The Paper.

The incident occurred at the Meixin Red Wine Town theme park near China's Chongqing municipality on Saturday. The theme park reportedly forced the pig to bungee jump as a publicity stunt for its new bungee jumping attraction.

In the footage that has gone viral on Chinese social media platforms, the animal is seen tied to a pole and being carried up the tower. It is then pushed down and jerked back up repeatedly as a crowd below cheers. According to ABC News, the pig was seen lying semi-conscious on the platform below before it was dragged away.

It was later sent to the slaughterhouse.

After the footage emerged online, a number of people criticised the stun as inhumane and called it animal abuse.

"Killing animals for consumption and treating them cruelly for entertainment are two different things," wrote one commenter on Weibo. "It's a disgusting marketing idea to attract attention by abusing a pig!" said another.

The theme park has put out a statement apologising for the incident, reports BBC.

"We sincerely accept netizens' criticism and advice and apologise to the public," the statement said. "We will improve our marketing of the tourist site, to provide tourists with better services."