"Look at his features clearly, his nose, eyes, ears, mouth and eyebrows. These won't have changed. We welcome any tips." 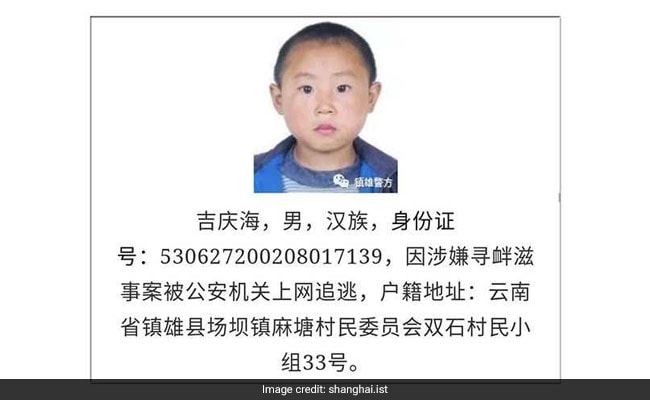 Police released a pic of wanted criminal Ji Qinghai - from when he was a schoolboy.

Police in a county in southwestern China have apologised for posting a picture of a criminal - from when he was a child. The photo was released on Tuesday by officers in Zhenxiong county, Yunnan province, reports South China Morning Post. The police released a 100 photographs, out of which four showed children, and one in particular went viral online. It features a boy of primary school age in a blue shirt, staring rather innocently at the camera.

"Ji Qinghai, male, ethnicity Han ... is wanted by the police for involvement in a public nuisance case," the police notice announced, stating his ID card number.

After the pic went viral on Chinese social media platforms and the police was trolled mercilessly for it, an officer of Zhenxiong county police defended the decision to use an old photograph because more recent ones were not available.

A Zhenxiong police officer, Mr Liu, told the Chongqing Morning Post that the photo the police had of Ji when the crime took place was blurry, so they used one from when he was a child.

"The use of old children's photos (now removed) has drawn the attention of netizens and created a negative influence," the post read. "We sincerely apologise for the carelessness in our work."