Video: Girl With Prosthetic Leg Climbs Over A Ditch, Wins Hearts On The Internet

The video has been going viral since it resurfaced on Twitter one day ago. 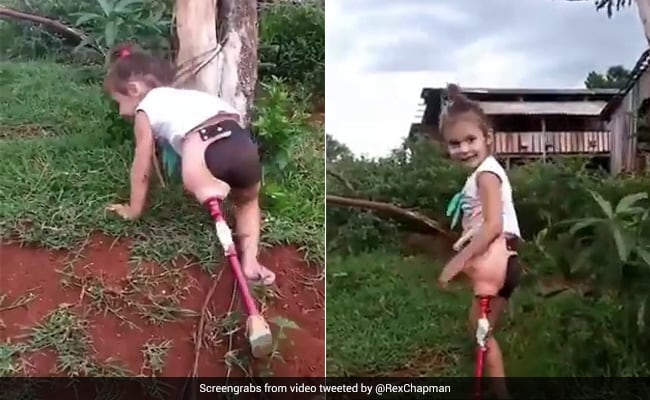 A viral video shows a girl with a prosthetic leg climbing over a ditch.

The internet is a wonderful treasure trove of inspiring stories. Videos of grit, love, and kindness often transcend boundaries of language and culture thanks to social media platforms. One such heart-warming video shows a young girl with a prosthetic leg trying to climb over a ditch with some encouragement from her mother. The video, which was originally posted on Instagram in January, found its way to Twitter recently and has gone viral on the microblogging platform.

In it, the mother, who is recording the video, can be heard shouting words of encouragement to her daughter, Antonella. The child is skeptical of her ability to climb the ditch and she even puts out her hand for support. Her mother is heard saying, “You know how to! You can do it.” As the girl continues to struggle, the mother adds, “No, you are not going to fall. You are strong.”

After a few failed attempts, the girl manages to climb over the ditch and lets out a cry of happiness. Her mother says, “You see how you did it?” and asks her daughter to turn around. To this, the girl smiles and flashes a ‘thumbs up' at the camera.

The clip was first shared on an Instagram account dedicated to the young amputee back in January. It has been going viral since it resurfaced on Twitter yesterday. Since being posted on the microblogging platform, it has been viewed nearly 3 lakh times, collecting hundreds of comments from viewers moved by the girl's determination.

The tweet was shared by former American basketball player, Rex Chapman, who was moved by the girl's smile at the end of the video.

Replying to the video, one user praised the mother for her continued words of encouragement.

Thank god the world has people like this in it. Shout out to the mum too. She did that perfectly. Legends

Another user, who goes by the name Susan, described the girl to be “heroic.”

As long as heroic little girls like this keep conquering mountains, I can surely attempt molehills in my own life.

Here are a few more reactions.

The world put into perspective for the day. What a brave and inspirational young girl https://t.co/NfEEOgqZsd

We can all take a page out of Antonella's book https://t.co/SuAsapuGwq

Tell us what you think of the lovely video.

"When Your Grandparents Party Harder Than You": Video Will Make You Laugh