Chennai Airport Sign, Shared By Shabana Azmi, Has Everyone In Splits 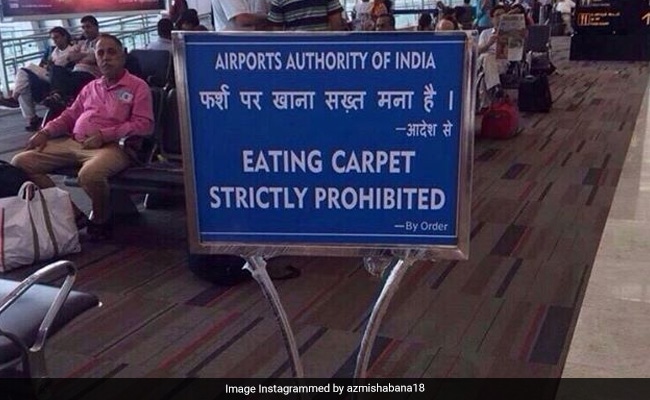 A sign posted at the Chennai International Airport has become a source of amusement for many, including Shabana Azmi. Early this morning, the 'Masoom 'actress took to Instagram to share an old picture of the hilarious Airports Authority of India sign, its message clearly lost in translation.

"Farsh par khaana sakht mana hai," reads the sign in Hindi, which translates to "Eating on the floor is strictly prohibited."

While that sounds like a completely reasonable request, the English translation of this message on the sign doesn't quite get it right. It simply reads - "Eating carpet is strictly prohibited."

"Really?" wrote Ms Azmi, 69, while sharing the picture, which was clicked in 2015. Take a look at the mistranslated sign below:

Since being shared online about 9 hours ago, Ms Azmi's post has collected over 1,700 'likes' and a number of comments.

"Carpet might be too chewy to eat," said one commenter. "ROFL eating your words has a new meaning," another added.

A few also tried to correct the translation, pointing out that the word "on" is missing. "Eating ON carpet. ON missing," wrote one Instagram user.

According to UPI, the sign was actually photographed back in 2015 by businessman Justin Ross Lee, who had shared it on Facebook to the amusement of many.

This isn't the first time that a mistranslation has resulted in unintentionally hilarious messages. In New Zealand, Coca-Cola's attempt to mix English with Maori backfired spectacularly, with the company's slogan on a vending machine reading "Hello, death".