Caught On Camera: Tourists Plunge Into Water After Bridge Collapses

Fortunately, nobody was injured in the incident - though they were trolled mercilessly by social media users. 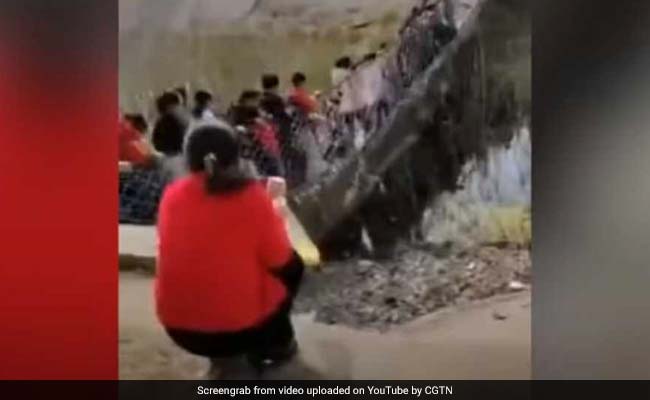 A bridge collapse in Jiangsu led to dozens of people being plunged into the water below.

In one more incident of a bridge collapsing in China, tourists were plunged into water after the wooden bridge they were standing on gave way. The incident occurred at a tourist spot in Jiangsu's Suining county, reports Shanghaiist. A video going viral on Chinese social media platforms shows dozens of tourists standing on the bridge and rocking it back and forth.

The wooden suspension bridge, clearly not meant to take the weight or the swaying, collapsed in the end - leading to dozens of tourists falling into the water below. Fortunately, nobody was injured in the incident - though they were trolled mercilessly by social media users for rocking a rickety bridge.

A version of the video was shared online by CGTN. Watch it below:

"They should put a sign up that says 'don't shake the bridge'" wrote one person in the comments section.  "At least no one's hurt. But no one comes out of this covered in glory either," another quipped. "Looks fun but once BROKEN, CONSIDERED SOLD. Everybody pay up for a new bridge," a third commenter laughed.

In October last year, a pedestrian bridge in China collapsed under the weight of all the tourists standing on it. Before that, it was a suspended footbridge that gave way after dozens of tourists bounced up and down on it.