Caught On Camera: Glacier Collapse Has Kayakers Paddling For Their Lives

"We're lucky to be alive right now," they can be heard saying on video 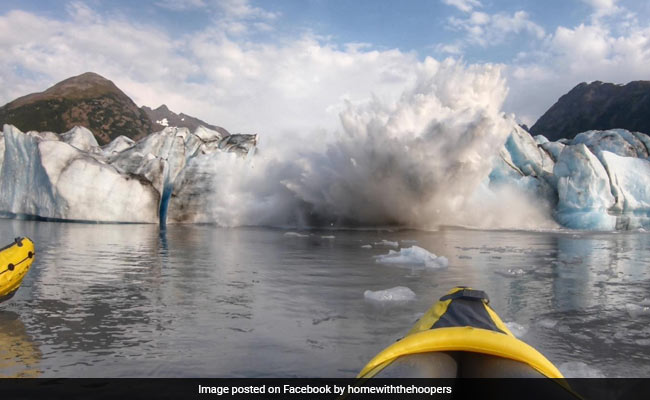 Two kayakers managed to capture a glacier collapse in Alaska.

Two men kayaking in Alaska count themselves lucky to have survived a sudden glacier collapse that sent a huge wave of water towards them. The two kayakers, Josh Bastyr and Andrew Hooper, who run the YouTube channels Steering South and Home With the Hoopers, respectively, ventured near the Spencer Glacier on Saturday.

It was during this camping and kayaking trip that they managed to capture a dramatic video of the glacier collapse. The video shows chunks of ice crashing into the water, sending a huge wave their direction. The collapse forced the two men to retreat to safety by paddling furiously.

"Oh my God, look at it," Mr Bastyr can be heard saying as he paddles away from the scene of the collapse. "Oh my God. Oh my God, we're lucky to be alive right now."

"When it fell, it was cracking small pieces here and there then a big chunk came, another big chunk, and then it just collapsed in on itself," Mr Hooper said to CBC News. "We were way too close."

According to CBC News, Mr Hooper said on Monday that they were lucky not only to escape injuries but also to witness the power of nature.

"It was absolutely gorgeous watching the raw power of the glacier as it fell in," he said. "It was a beautiful event that we were lucky to have survived."

In a Facebook post, he also described the experience as the "biggest adrenaline rush" of their lives.