Caught On Camera: Fearless Dog Chases Away Bear From Backyard

"He does chase after the bear whenever he sees him in the yard ... but not like this," says the dog's owner 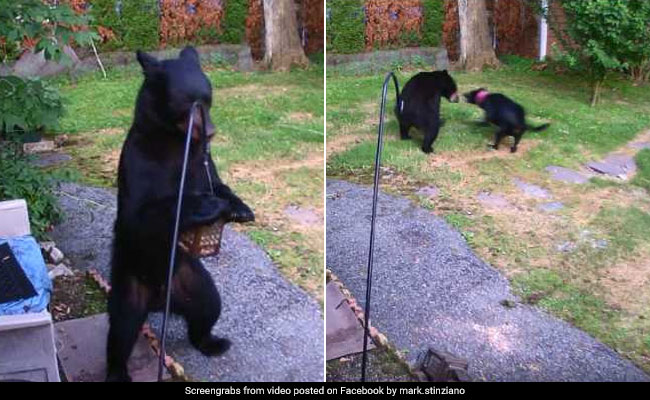 Riley the dog is being praised online for chasing a bear away.

A man from New Jersey has promised his neighbour's dog a steak dinner for chasing away a bear from his backyard. Amazing footage captured on Mark Stinziano's security cameras shows the interaction between the black bear and the dog, named Riley.

The video, which Mr Stinziano shared on Facebook, shows the bear knocking over a bird feeder before the dog charges at it. The dog, who races in from the neighbour's yard, barrels right into the bear, managing to scare it away.

"My neighbor's dog is getting a steak dinner next time I see him. He is an awesome pup that comes to check on the kids from time to time. Now he is keeping them safe!" wrote Mr Stinziano while sharing the video online.

The video has been viewed over 39,000 times since it was shared online on Tuesday. It has also received dozens of comments from people praising Riley, the dog who chased away an animal at least twice its own size.

Riley's owner, Alan Tlusty, told ABC 7 that this is not the first time his dog has chased a bear.

"It's incredible," he said. "He does chase after the bear whenever he sees him in the yard ... but not like this."

Let us know what you think of the video using the comments section below.