On Camera, Brothers Jump 40 Feet From Burning Building, And Are Caught

France Building Fire: Two brothers were caught by bystanders after they jumped from the third-storey window of an apartment on fire. 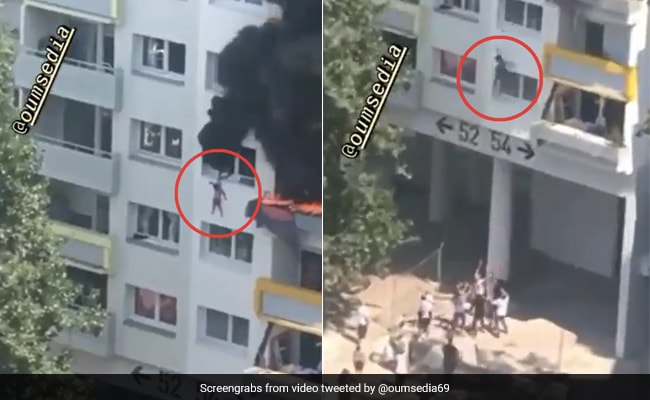 Building Fire In France: Two brothers jumped from the third storey of a burning building.

Two brothers are safe after jumping from the third-storey window of a burning apartment building in France. The children were caught by an army of rescuers standing below the building. According to the Daily Mail, dramatic footage of the rescue operation was captured in the city of Grenoble on Tuesday.

The children, aged three and 10, were unharmed by the fall. They were reportedly forced to jump down 40 feet to escape the burning apartment after their parents locked them inside without keys.

According to CTV News, footage of the rescue was captured by a neighbour who lives in a nearby apartment complex. The video shows people gathering below the apartment as flames and thick black clouds of smoke billow from the balcony. Two children, hanging out of the window, reportedly said that they could not leave as the door was locked.

Then, the elder brother lowered the three-year-old out of the window and into the arms of the rescuers waiting below before jumping down himself.

The two brothers, miraculously, did not suffer any injuries but might have suffered from smoke inhalation. They were hospitalised with other residents of the building and some rescuers, who fractured bones when they caught the brothers.

One rescuer, a 25-year-old student called Athoumani Walid, suffered a broken arm while catching the children. He said he heard shouting and rushed towards the burning building.

"I saw the two children screaming. They were at the window on the third floor," he said.

"There was a lot of smoke, flames, explosions, even inside the building. The children were scared. They were crying."

Grenoble's mayor, Eric Piolle, thanked the people who made the heroic rescue operation possible in a Facebook post.

An investigation has now been launched to determine the cause of the fire.