You will feel very cold after watching these videos 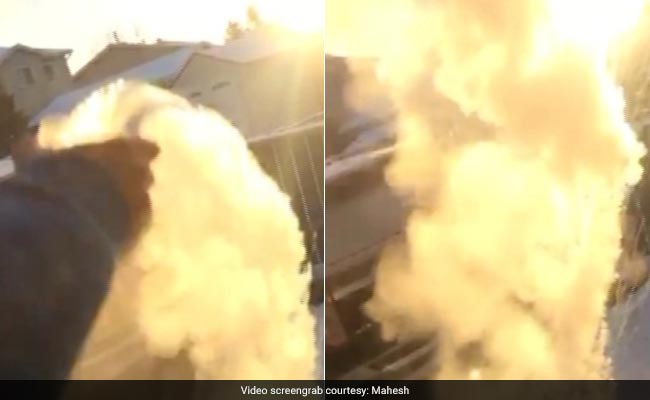 The amateur video was recorded at -30 degree Celsius in Edmonton, Alberta

On Thursday, the temperature at the Mars Gale Crater was -9.4 degrees. At Antarctica's Amundsen-Scott weather station, mercury was at about 1 degree. That's rather pleasant weather for some Canadians who are witnessing one of Canada's coldest winter spells since 1993 with temperatures breaching the -40 degree Celsius mark in some parts, according to Environment Canada meteorologist Alexandre Parent.

While daily life and infrastructure have taken a beating because of the really, really cold weather, some Canadians are getting creative. To give an idea of just how cold Canada is, (if the Mars analogy was hard to understand) several Canadians have posted videos of boiling water instantly turning into snow when exposed to the chilly air outside.

One such video sent to us shows a man flinging a cup of boiling water in the air and it instantly freezing into powdery snow. The slow-motion video was filmed in Edmonton, one of Canada's coldest cities right now, on December 30 when temperatures dropped below -30 degree Celsius.

The phenomenon that causes scalding hot water to freeze within seconds is called the "Mpemba" effect, named after Erasto Batholomeo Mpemba. According to the effect, under some circumstances, warmer water freezes faster than cold water. Here's one explanation of the effect by The Weather Channel.

Here's another video from Edmonton shot at -25 degree Celsius

A lot of New Year's Eve festivities were canceled in Canada as a result of the weather. The animals too are feeling the chill with Calgary Zoo shifting some of its penguins indoors.Click for more trending news