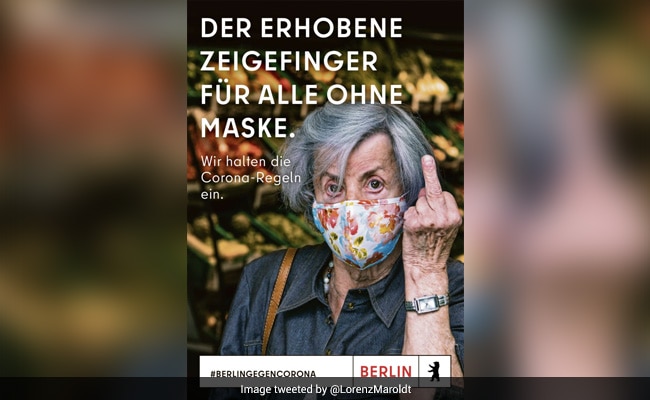 Berlin has a not-very-polite message for anti-maskers in its latest tourism advertisement. The German capital's tourism authority has launched an ad campaign which shows a woman flipping off mask rule breakers, reports BBC News. The poster features an elderly woman, wearing a floral-patterned mask, her hand outstretched and middle finger raised.

"A finger-wag for all those without a mask," reads the text alongside the picture, according to a translation provided by local news website Deutsche Welle.

Visit Berlin has said that the ad is aimed at protecting the health of the elderly and preventing further spread of the highly contagious coronavirus, but it has proven to be very controversial. Launched by the Berlin Senate and Visit Berlin, it appeared in a newspaper on Tuesday and quickly spread on social media.

While some social media users praised the direct, no-nonsense messaging, others deemed the ad campaign insulting. Lorenz Maroldt, editor-in-chief of Berlin's Der Tagesspiegel newspaper, criticised it as a failure of effective messaging.

"The Senate seem to think that insulting people is more successful than strict, clear rules with efficient controls. They failed with that completely," he said.

Christian Tanzler, a spokesman for Visit Berlin, told BBC that the campaign chose a provocative motif to draw attention to the problem to anti-maskers.

"Most Berliners and our guests respect and follow the corona rules but some people don't. These people risk the lives of older people and people from the at-risk community," he said. "We wanted to give attention to this problem. For this reason we have chosen this provocative motif."

The coronavirus pandemic has introduced a new normal where several countries have made face masks and coverings mandatory for anyone stepping out of their houses. A study published in PNAS: The Proceedings of the National Academy of Sciences of the USA, suggests that mask-wearing rules may have prevented tens of thousands of infections.