Banksy Comes Out In Support Of Racial Justice With Latest Artwork

"People of colour are being failed by the system. The white system," wrote Banksy. 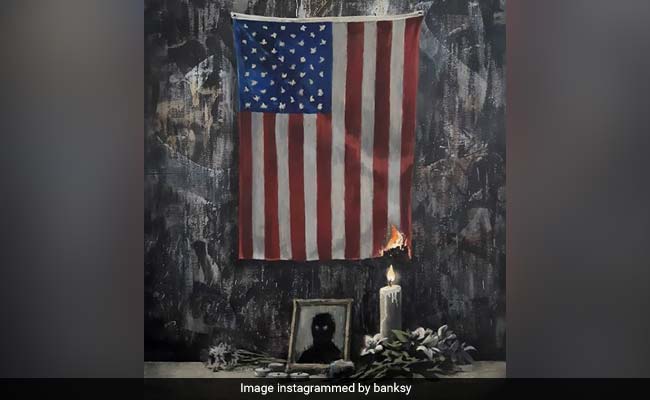 Banksy has shown his support for anti-racism protests that have swept the US with his latest artwork. The anonymous artist unveiled the artwork on Instagram over the weekend, saying "people of colour are being failed by the system". It shows the American flag being set alight by a candle that is part of a memorial to an anonymous black silhouetted figure.

The artwork from the England-based artist appeared on Instagram as outraged protesters from Sydney to London on Saturday kicked off a weekend of global rallies against racism and police brutality. Tens of thousands of people descended the streets to protest the death of George Floyd, an African-American man who died after being pinned beneath a police officer's knee for nearly nine minutes in Minneapolis, Minnesota.

According to BBC, thousands of people attended a demonstration in Bristol, Banksy's hometown, to protest the death of Mr Floyd.

"People of colour are being failed by the system. The white system," wrote Banksy in a note accompanying the artwork. "Like a broken pipe flooding the apartment of the people living downstairs. The faulty system is making their life a misery, but it's not their job to fix it. They can't, no one will let them in the apartment upstairs.

"This is a white problem. And if white people don't fix it, someone will have to come upstairs and kick the door in."

The artwork has collected over 2.3 million 'likes' on Instagram.

Banksy's identity is a closely-guarded secret. The street artist has gained a global following with his works that draw attention to social issues. Last month, a piece depicting a nurse as a superhero had emerged at a Southampton hospital as a tribute to healthcare workers amid the coronavirus pandemic.