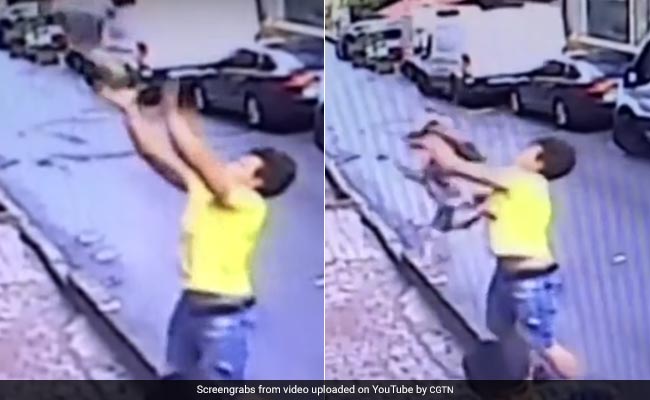 CCTV footage shows a teenager catching a 2-year-old girl after she fell from a building.

Chilling CCTV footage has captured the moment a two-year-old girl fell from her second floor family apartment and was caught by a teenager standing below. According to ABC News, Doha Muhammed was caught by 17-year-old Feuzi Zabaat, who noticed that she was about to fall down from the window of her home. The incident occurred in the Fatih district of Istanbul, Turkey last Thursday.

Mr Zabaat quickly positioned himself on the pavement to catch the toddler before she could hit the pavement, preventing a certain tragedy. His presence of mind ensured that the 2-year-old survived the fall without any injuries, and he has since been hailed a hero on social media, where the CCTV footage has been widely shared.

Mr Zabaat, an Algerian immigrant who works in a workshop on the same street where the accident occurred, says that he did what he had to do to save the girl.

According to Daily Sabah, Doha fell from the second storey window after she approached it while her mother was busy cooking. Though unharmed, the incident left her shaken. In the video, locals were seen trying to comfort her after the fall.

Her family, meanwhile, has rewarded her rescuer with a gift of 200 Turkish Liras to show their gratitude.

The Internet Is Confused By This Pic Of A Girl 'Stuck' In Sidewalk. Can You Figure It Out?