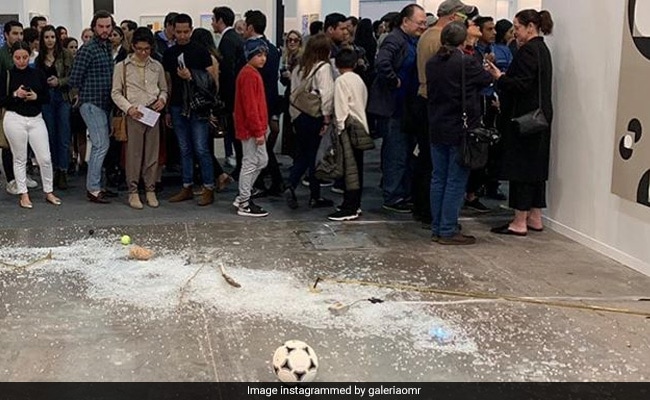 An art critic has apologised for accidentally destroying an installation at a premiere art fair in Mexico. Critic Avelina Lesper said she accidentally shattered the artwork by Mexican artist Gabriel Rico on Saturday when she placed an empty soda can near it to express her disapproval, reports The Guardian. The incident took place at the Zona Maco art fair in Mexico City.

Gabriel Rico's art installation was on display at the OMR Gallery and valued at $20,000 or approximately Rs 14 lakh. Titled Nimble and Sinister Tricks (To Be Preserved Without Scandal and Corruption), it consisted of a glass pane with objects like a feather, a football and a tennis ball inside.

According to BBC, Avelina Lesper apologised for the "lamentable incident" and insisted that it was not intentional. "It was like the work had heard my comment and had felt what I thought of it", she said in a video statement shared by the Mexican newspaper that publishes her columns. "The work shattered into pieces and collapsed and fell on the floor."

Meanwhile, the OMR Gallery, in a statement posted on Instagram, said Ms Lesper's actions showed a "lack of professionalism and respect" but conceded that the destruction appeared accidental.

"Lesper coming too close to the work to place a soda can on it and take a picture as criticism without a doubt caused the destruction," the gallery said according to a translation provided by BBC.

"We do not understand how an alleged professional art critic destroyed a work by one of the most outstanding artists of the moment."

Ms Lesper said she suggested the gallery leave the piece shattered to show its evolution - an idea that was rejected. She then offered to repair it. The gallery has said it will soon reveal what its next step will be.