"Are The Bidens Giants?": This Joe Biden-Jimmy Carter Pic Has People Baffled

A photograph from Joe Biden's meeting with the Carters has gone viral. 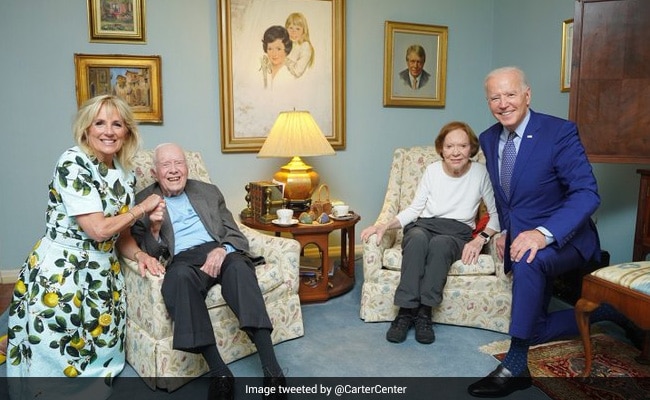 Joe and Jill Biden met the Carters on Thursday.

Are the Bidens suddenly very big? Or have the Carters shrunk? These are the questions that Twitter is asking after a photo that shows US President Joe Biden and wife Jill dwarfing former president Jimmy Carter and former first lady Rosalynn Carter went viral on social media.

But a photo from the meeting, released by the Carter Center on Monday, had many doing a double take. The photograph shows the Carters sitting in armchairs, with the Bidens kneeling next to them. However, the Bidens appear to be much taller than the Carters

We're pleased to share this wonderful photo from the @POTUS and @FLOTUS visit to see the Carters in Plains, Ga.!

Since being posted yesterday, the picture has gone viral with over 77,000 'likes' and thousands of puzzled comments.

"Am I the only one who thinks this looks like a tiny doll museum, and Joe and Jill are giants?" asked one Twitter user.

Adorable! But am I the only one who thinks this looks like a tiny doll museum, and Joe and Jill are giants?

"It is a nice photo, but it looks very bizarre. How did that happen?" another remarked.

Hello, Carter Center, Why do Flotus and Potus look gigantic next to the Carters, it is a nice photo, but it looks very bizarre, how did that happen?

Take a look at some of the other amused reactions that the optical illusion has racked up:

What concerns me here, is that it was someone's job to make sure the little old Carter's weren't sitting in little old chairs six inches off the little old floor, and also, so the Bidens wouldn't look like little old giants. pic.twitter.com/vOCy593ots

In which we learn that Joe and Jill Biden could both play center in the NBA https://t.co/FegpMMpYUp

The weird proportions in the now-viral pic were most likely caused by a wide-angle lens that distorted the subject sizee. According to PetaPixel, Joe and Jill Biden were closer to the camera than Jimmy and Rosalynn Carter, and because of how wide angle the shot was, they appear much bigger than they actually are.

At age 96, Jimmy Carter is the longest-living president in American history, while Biden at 78 is the oldest to take the position.