Anushka Sharma And 7 Other Celebrities Who Are Vegetarian

"Going vegetarian was one of the best decisions I ever made," says Anushka Sharma 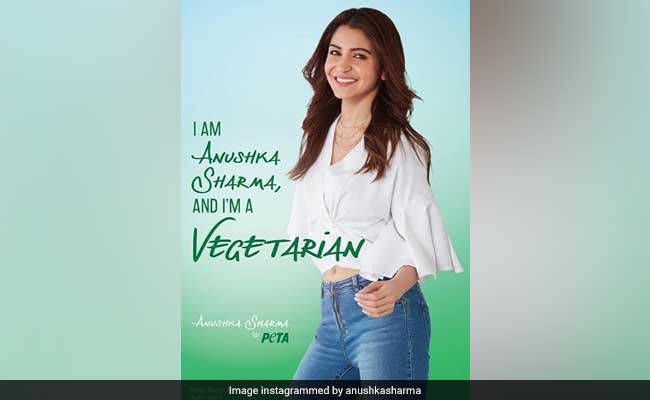 "I'm so happy that no animals had to suffer for my meals," writes Anushka Sharma

Actress-producer Anushka Sharma, who turned vegetarian over three years ago, says it is one of the best decisions she has made. In a new campaign for People for the Ethical Treatment of Animals (PETA) India, she proclaims, "I Am Anushka Sharma, and I'm a Vegetarian". In the ad, shot by Mazen Abusrour, Anushka smiles joyfully into the camera, flaunting an outfit from her brand NUSH.

"Going vegetarian was one of the best decisions I ever made. I have more energy, I feel healthier, and I'm so happy that no animals had to suffer for my meals," Anushka said in the statement accompanying the photograph.

The only way forward for me is through a way in which I take care of the world around me and co-exist with my environment. This is the best decision I've made and I am content with the knowledge that I've made a little difference in the world in this way. @petaindia

PETA India's motto reads, in part, that "animals are not ours to eat".

Anushka Sharma, according to the animal rights organisation, has been a vegetarian for three and half years. She was named PETA India's Hottest Vegetarian Celebrity in 2015 and its Person of the Year in 2017. She is, however, not the only celebrity to have gone green - she has joined the ranks of Lara Dutta, Shahid Kapoor  and R Madhavan who have teamed up with PETA India to promote meat-free meals.

Here are some Indian celebrities who have ditched meat to go vegetarian:

The superstar is perhaps one of the most well-known vegetarians in the Hindi film industry today. He has been crowned "PETA's Hottest Vegetarian" multiple times.

Happy Birthday @shahidkapoor. Hats off to your unmatched love for animals! Lot of Love,PETA India pic.twitter.com/FPXG4kKg6a

The Padmaavat star was crowned PETA's Hottest Vegetarian in 2016. "I love chicks - pigs, cows, fish, and all the other animals, too. That's why I turned vegetarian," Shahid has said, according to PETA.

PETA's hottest vegetarians for the year 2017 are @RajkummarRao and @aliaa08. https://t.co/Tf5XgcTX2E

A recent convert, Alia Bhatt was named PETA's Hottest Vegetarian for the year 2017 along with Rajkummar Rao.

The PadMan actor is known to be a vegetarian and vegan by choice. Her brand Rheson has won PETA's Compassionate Business Award for making bags exclusively with non-leather materials.

The talented actor is also a well-known vegetarian. Vidya Balan was awarded the Hottest Vegetarian title by PETA in the year 2010.

#HappyBirthday@SunnyLeone Thanks for making the world a lot more sunnier for the animals, for always supporting their rights and standing up for their welfare. We love you! https://t.co/MKi4rGKZnZpic.twitter.com/cNrcnPR61T

Sunny Leone has starred in PETA's pro-vegetarian campaigns and is quoted to have said ""We live in a world with such amazing advances in vegan materials and options for everyone. There is no reason for anyone to support cruelty in any form."