"This has made me laugh so hard," wrote one person in the comments section 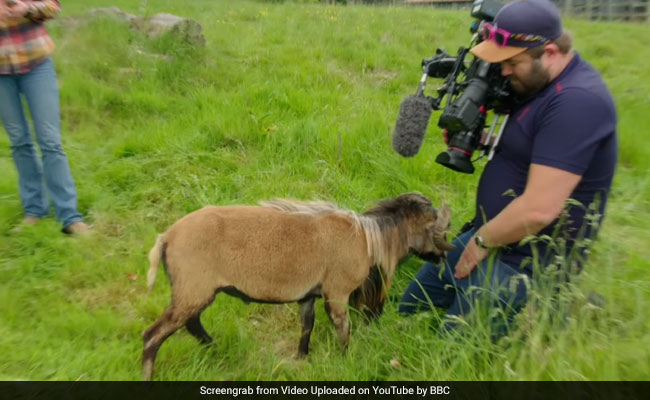 A goat attacked a BBC cameraman in a video going viral online.

This BBC cameraman will probably steer clear of all goats after this incident. A video going viral online shows an apparently angry goat attacking the cameraman, smacking him hard. The incident took place while BBC's crew was filming Animal Park - a series "exploring life behind the scenes at Longleat Estate and Safari Park" in Wiltshire.

In the video, shared by BBC on Monday, a park employee introduces one of their animals as Cecil, a Cameroon sheep from Africa. Cameroon sheep are one of the world's rarest breeds of sheep, according to The Guardian.

The keeper explains that the park's Cameroon sheep had become overconfident - and Cecil soon proves her right by charging at the cameraperson filming him. The man, apparently injured by still chuckling, keels over in pain after the unexpected attack.

"Cecil, don't do that. I am so sorry," the keeper responds, laughing.

Since being shared online, the video has collected over 8 lakh views on YouTube and hundreds of amused comments.

"This is the quality content I pay my license fee for," wrote one person. "I'm laughing out loud," said another, while a third wrote: "This has made me laugh so hard. I loved it. Sorry, cameraman."

Many also commended the cameraman for saving his camera before falling over.

According to The Sun, Cecil the sheep is part of a rowdy all-male group at the Warminster estate. In fact, he had already been ticked off for attacking his keeper's shins.

Recently, another BBC video had gone viral online. It showed a 'giant' spider hijacking an interview.