Prabhakar Reddy P, a martial arts master, set a new world record after crushing 212 walnuts in one minute with his hand. 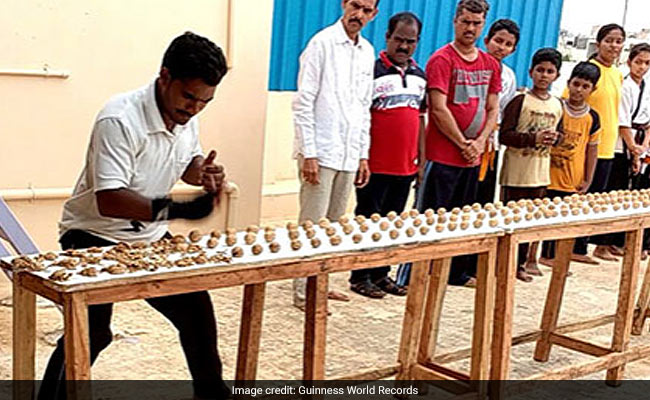 Prabhakar Reddy P, a martial arts master from Andhra Pradesh, set a new world record after crushing over 200 walnuts in one minute with his hand.

A video posted on YouTube by Guinness World Records shows Mr Reddy smashing 212 walnuts with his hand as the 60-second deadline looms and a hopeful crowd looks on.

Rows and rows of walnuts were placed neatly on a long wooden table and, according to Guinness World Records, inspected by independent witnesses beforehand to ensure all the walnuts were raw and undamaged.

In order to count towards the final tally, the shells of the walnuts had to be smashed into a minimum of two pieces.

The 35-year-old martial arts pro told Guinness World Records that he practised every day before the attempt.


Promoted
Listen to the latest songs, only on JioSaavn.com
Guinness World Records admits that while challengers for the title are allowed to wear a fabric glove on their crushing hand, the attempt is likely to be painful "even for the most experienced of martial artists."

"Wonder how his hand felt after smashing all of the nuts," asked one person on YouTube. "Wow! This is nuts," joked another. "Forget about the record, look how organized the nuts were," laughed a third.Click for more trending news