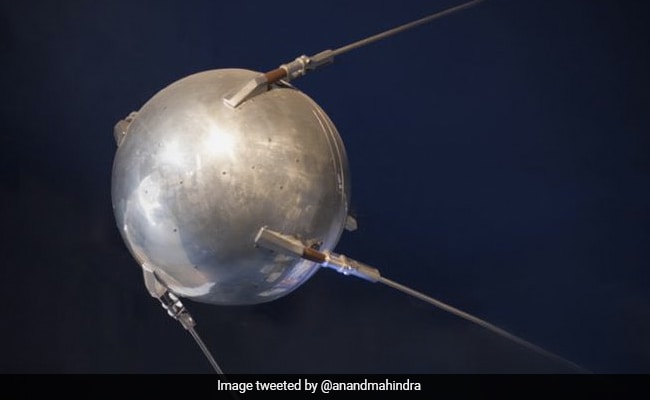 Industrialist Anand Mahindra, who is known for his engaging posts, has shared a new picture on his Twitter account and asked his 8.4 million followers to identify it, saying no millennial will recognise the image right away but every millennial will recognise its name today. What is this “thing” that millennials would know by name but not its image? The photo shared by Mr Mahindra shows an inverted aluminium sphere tied to four whip-like antennas which appear to hold the object suspended.

Accept the 66-year-old Mahindra Group chairman's challenge and figure the image out:

Since being posted on Thursday evening, the image has attracted comments from a number of people, many of whom identified the object as Sputnik 1 satellite launched by the Soviet Union on October 4, 1957, as the Earth's first artificial satellite. Now, Russia has developed a vaccine against COVID-19 that is named Sputnik V.

Probably, this is the reason why Mahindra said most would know the name but won't recognise the image. Twitter users though successfully changed the notion here.

Something that stole the millions of years of monopoly of the Moon.

Sputnik 1 was named after the Russian word for “satellite”. It had kicked off the space age but is also believed to have set the ball rolling on the Cold War space race. Two months after Sputnik 1's launch, the US attempted to launch its first satellite —Vanguard Test Vehicle 3 (TV3) — but failed. Sputnik 1 weighed 83 kg and was 23 inches wide, quite small in size when compared to the spacecraft of today.

The first batch of 1,50,000 Sputnik V has already arrived in India and its rollout is expected to begin soon, after safety protocols by government drug regulators are completed. The Russian vaccine has a declared efficacy rate of 91.6 per cent and it was approved for emergency use in India on April 12, when the second wave of Covid-19 cases had started peaking in the country. The daily cases are still above 3 lakh but the data over the past two days showed the virus spread was thinning out.

Government experts have advised people to not yet relax their guard and maintain a COVID-appropriate behaviour, warning that a third wave is still lurking.