The Inspiring And Heartbreaking Story Of Aisha Chaudhary, Told In 'The Sky Is Pink' 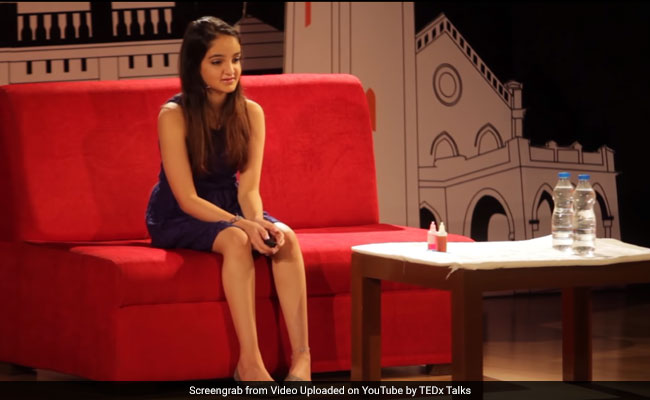 Aisha Chaudhary during a TEDx Talk in 2014.

The bittersweet trailer of 'The Sky Is Pink' dropped on Tuesday. The Shonali Bose-directed film features Priyanka Chopra and Farhan Akhtar. Zaira Wasim plays their onscreen daughter Aisha, who is dying because of Busulfan Lung Damage. 'The Sky Is Pink' in inspired by the real-life story of Aisha Chaudhary, who was born with an immune deficiency disorder and died at the age of 18.

Aisha Chaudhary was born with SCID (Severe Combined Immuno-Deficiency) in 1996. She was just six-months-old when she had to undergo her first bone marrow transplant. Despite suffering from pulmonary fibrosis- a condition that causes scarring and hardening of the lungs - Aisha's extraordinary optimism became an inspiration for many.

As a result of her condition, Aisha's lungs worked at less than half their capacity. She had trouble walking, lifting things, and had to use a wheelchair to get around - but none of that deterred her.

Aisha, a student of the American Embassy School in Delhi, became a celebrated motivational speaker and author as a teenager.

TEDx Talks describes her as a girl of "persistent optimism" and "extraordinary maturity in the face of impossible odds".

"The only thing that truly matters to me is being happy," Aisha said during a TEDx Talk in 2014. "Happiness is a choice one makes. I can either choose to be happy and try to smile thorough all of my difficult times, or I can choose to be miserable.

In 2015, her book 'My Little Epiphanies' was published. According to Bloomsbury, 2014 was a "brutal" year for Aisha as her disease progressed and her lungs started giving up on her. It was during the last few months of the year that Aisha, lying in her bed, wrote down her thoughts  that were later compiled into 'My Little Epiphanies'.

Aisha died on January 24, 2015 - just a day after her book was launched at the Jaipur Literary Festival.