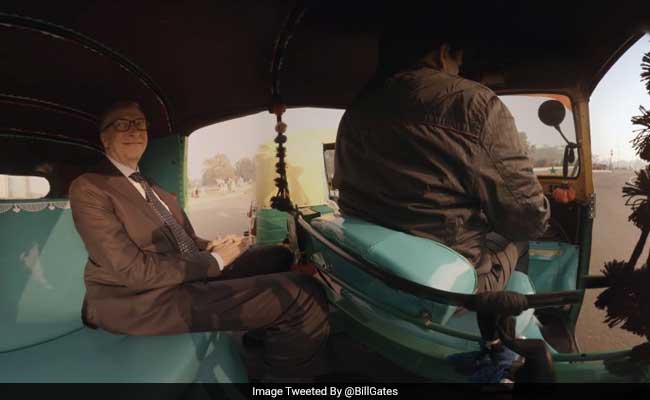 Bill Gates' tweet about visiting India has touched a chord with people.

NEW DELHI: The world's richest man, Bill Gates, was recently in India and has posted several videos and pictures from his visit. His most recent share from his time in India is a picture of him riding in an auto around India Gate. However, what's even more wonderful than the picture itself is the Microsoft co-founder's tweet accompanying it. "I try to visit India at least once a year. I'm inspired by something new every time," he says on Twitter. Since being posted some nine hours before writing this, the tweet has collected a whopping 10,000 'likes' and over 2,800 retweets.

I try to visit India at least once a year. I'm inspired by something new every time: https://t.co/lKUrPiffeIpic.twitter.com/Lp8Do3mh0a

The business mogul and philanthropist's tweet also links to his most recent blog in which he praised Prime Minister Narendra Modi's Swachh Bharat campaign, which aims to end open defecation by 2019.

Referring to PM Modi's first speech on Independence Day three years ago, Mr Gates says in his blog: "I can't think of another time when a national leader has broached such a sensitive topic (open defecation in the country) so frankly and so publicly."

"What I love most about Clean India is that it identified a big problem, got everyone working on it, and is using measurement to show where things need to be done differently," he adds.

While his words for PM Modi won him a lot of love online, his tweet about visiting India and being inspired by the country has also touched a chord with people.

Promoted
Listen to the latest songs, only on JioSaavn.com
"Sir really happy and feeling proud to read your this tweet. We Indians should also introspect to see growth and prosperity within ourselves," says one commenter on the tweet. "Awesome Sir. It's wonderful to have such a great person visit our country," says another, not unlike many others.

Watch: Owners Try and Keep Dogs At Bay As Rat Causes Chaos At Park In US