After 10-Minute Wedding, Doctor Rushes Back To Treat Coronavirus Patients

The groom, Li Zhiqiang, rushed back to treat coronavirus patients after his wedding. 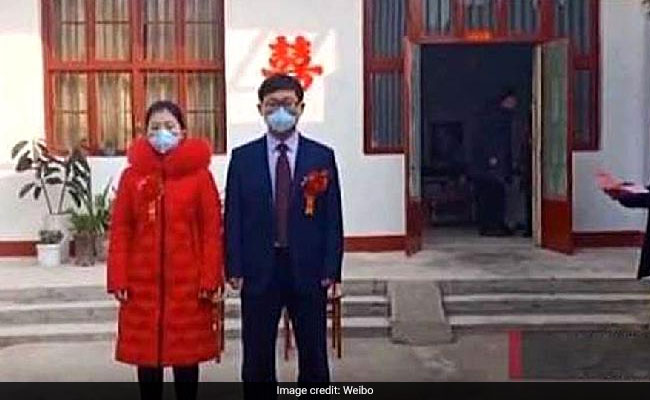 Li Zhiqiang and Yu Hongyan pose with face masks on after their wedding.

The coronavirus outbreak has claimed 490 lives in China and spread to more than 20 countries, including India, Britain and Russia. In the Hubei province - whose capital Wuhan is believed to be the epicenter of the deadly outbreak - about 56 million people have been put under virtual lockdown since last week to contain the spread of infection. Al Jazeera reports that the rapidly spreading virus has stretched the healthcare systems in Hubei and the rest of the country, leaving doctors and nurses overworked.

In the midst of this, a doctor in China is being praised for giving up his wedding celebrations to treat coronavirus patients.

According to a report in China Times, a couple in Heze, Shandong, held a 10-minute wedding on the morning of January 30 before the groom rushed back to treat patients. As the wedding had been planned before the outbreak, the couple decided to go ahead with it, inviting only their parents to attend.

The groom, Li Zhiqiang, works as an obstetrics clinician at the Second Hospital of Shandong University. After his super-short wedding, he went back to the hospital to help deal with the coronavirus crisis.

His bride, Yu Hongyan, supported his decision to keep the wedding simple. Photos that have been shared on Chinese social media platforms like Weibo show the newlyweds posing with masks on their faces.

After more than 20 countries confirmed the cases of infection, the World Health Organisation (WHO) declared coronavirus a global health emergency. Several countries have issued travel bans to China.

India has reported its third case of coronavirus in Kerala. The government on Wednesday issued a statement saying that all the existing visas from China issued since January 15 stand cancelled.