She has been vocal about the issues women in Iran are facing and her encounter with the "morality police" in the country. 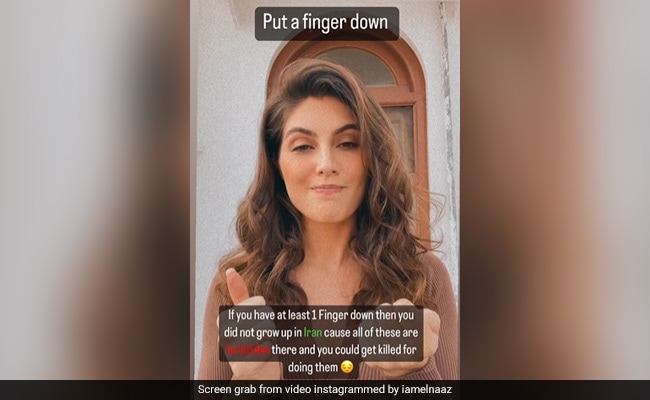 Ms Nourozi can be seen undertaking the 'put a finger down challenge.'

Elnaaz Norouzi, an Iranian born actor known for her work in Netflix series 'The Sacred Games', has posted a new video against the country's government in her home country and in support of the anti-hijab protests. She has been vocal about the issues women in Iran are facing and her encounter with the "morality police" in the country. She had joined the massive protest by helping women assert their right to wear anything they want.

In the latest video posted on Instagram, Ms Nourozi can be seen undertaking the 'put a finger down challenge.' She puts a finger down in different scenarios, exhibiting that she has undertaken that activity. Some of the scenarios include sitting next to someone of the opposite sex in school, dancing in public, swimming with both of your parents in a public pool, kissing a member of the same sex as you, been on a date and holding your partner's hand in public. It is to be noted that the actor kept a finger down in most of the scenarios implying that she had done these activities in the past.

However, what comes next is a surprise. The text super in the video reads, "If you have at least one finger down, you did not grow up in Iran cause all these are forbidden there and you could get killed for doing them."

She captioned the post as, "Do this Challenge !!!! If my Parents wouldn't have taken the decision to move to Germany while I was a child... none of my fingers would have been down... this is how life in Iran is... I hope now you understand that it's not just about Hijab... besides these issues mentioned in the video it's the horrible economy that Iranians have to deal with despite Iran being one of the richest countries in the world."

Since being shared, the post has amassed over four lakh views and 34,000 likes.

"Great presentation of what's going on in Iran in all these years! The ridiculous part is that some people can't imagine it and some ignore it!" said one user.

"What a great way to educate the world about the atrocities in Iran. Will never believe Iran to be a humanitarian country," said a second user.