Hilariously, one rule at the UK cafe also read, "CCTV Surveillance. Act like your Mum's here". 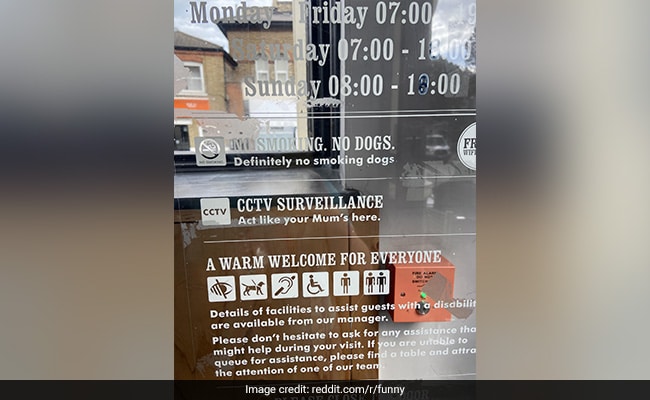 The eatery was identified to be a Costa Coffee outlet in South London.

A photo of a long list of customer instructions at a cafe has left the internet completely baffled after it surfaced on social media. The image quickly became viral after being uploaded on Reddit on Saturday, with some 73,000 upvotes and more than 1,000 comments.

The list included rather obvious rules such as "No Smoking". However, of all the rules, the one that left internet users perplexed was, "No Dogs. Definitely No Smoking Dogs". Other than this, there were also different signs that invited a lot of people but some of them seemed confusing. Hilariously, one rule also read, "CCTV Surveillance. Act like your Mum's here".

The eatery was identified to be a Costa Coffee outlet in South London.

Internet users were confused reading the bizarre set of rules. "Looks like dogs are not welcomed but service dogs are allowed but they can't be smoking inside," wrote one user. "Smoking dogs doesn't really make sense to me. If you're going to do that, you might as well just go with sausage instead," added another.

A third said, "Even service dogs can be kicked out of an establishment if they are causing trouble. The sign clearly says "no smoking." Dogs can read, right?"

One social media user even pointed out that the restaurant "assists people with all kinds of disabilities, whether they are blind, need a service dog, be deaf, crippled, single, or GAY."

Meanwhile, in another unusual instance, a woman in the United States came up with an innovative yet hilarious technique to send her resume to the company she was applying. Taking to LinkedIn, Karly Pavlinac revealed that she applied for a job at Nike and sent her resume printed on a cake. She said that she did this because she only wanted to let them know about her.