A Panda Cub Plays With His Mother In This Delightful Video. Watch 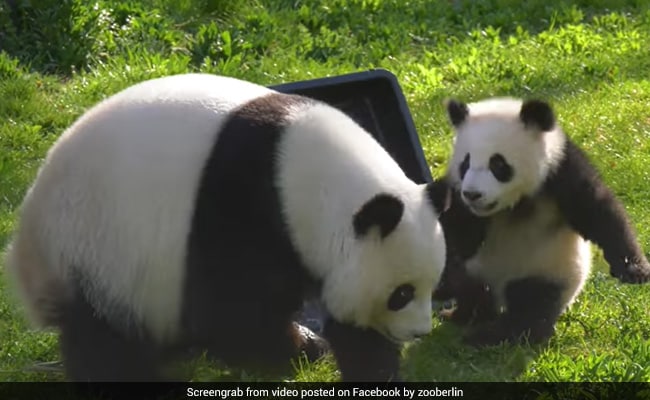 It's playtime for Pit the panda cub at Berlin Zoo.

An adorable video that shows a panda cub playing with his mother is winning hearts on social media. Footage released by Germany's Berlin Zoo shows Pit the panda cub rolling around playfully with his mother Meng Meng, while his twin brother Paule went up a tree for a relaxing nap. The video, shared yesterday on Facebook, has left viewers delighted.

Pit and Paule, officially named Meng Yuan and Meng Xian, were born in Berlin Zoo last August, reports Daily Mail. The adorable cubs and their mother, Meng Meng, have become one of the main attractions of the zoo. They are the only giant pandas in Germany currently.

In a lighthearted caption accompanying the video, Berlin Zoo said that Pit wouldn't leave his mother's side - not even to let her have a cooling bath to beat the heat. The viral video shows the panda cub splashing his mother in a paddling pool placed inside their enclosure, rolling around in the grass and climbing trees with her.

Since being posted yesterday, the video has been viewed over 28,000 times on Facebook. It has also collected over 4,000 'likes' and dozens of comments gushing over the pandas.

"Such a great video. Beautiful to watch," wrote one person in the comments section.

"Just too cute to watch their mother and son play," another said.

Only a few days ago, Pit's brother Paule had been filmed splashing about in his tiny pool in a video that had left thousands going "aww".

According to Berlin Zoo, the panda twins weigh 19 kgs each and have started chewing fresh bamboo. They will remain at the zoo for two years before being sent to China.

What do you think of these videos? Let us know using the comments section.